UNICEF/Roger Lemoyne
UNICEF supplies vaccines for a massive cholera vaccination campaign targeting all Rohingya refugees that have arrived in Bangladesh.

10 October 2017
In a race to prevent a cholera outbreak among the more than half a million Rohingya refugee arrivals over the past six weeks in Cox’s Bazaar, Bangladesh, United Nations agencies launched on Tuesday a massive immunization campaign.

The campaign, which is led by the Ministry of Health and supported by the WHO and The UN Children’s Fund (UNICEF), is being held in Ukhiya and Teknaf, where more than half a million people have arrived from across the border since August, joining vast numbers already residing in a series of settlements and camps.

Some 900,000 doses of the vaccine have been mobilized and are being delivered by more than 200 mobile vaccination teams, making it the second largest oral cholera vaccination campaign ever, according to the UN.

“WHO is committed to mobilizing its full technical and operational capacity to support the Ministry and our partners to protect, promote and secure the health of this immensely vulnerable population,” he added.

After more than 10,292 cases of diarrhoea had been reported and treated from across the settlements and camps over the last week, WHO warned of the potential for a cholera outbreak.

The International Organization for Migration’s (IOM) Senior Regional Medical Officer for Asia and the Pacific, Patrick Duigan, welcomed the critically important initiative, but stressed, “there are still multiple and serious public health risks for this refugee population and a massive scale up of resources and the overall response is needed to mitigate further risks of life threatening illnesses.”

To help meet water, sanitation and hygiene needs, UNICEF is scaling up its interventions and communication on safe practices, and prepositioning critical supplies for case management and supporting the Ministry of Health to set up diarrhoea treatment centres, among other response-oriented interventions.

In parallel, against the backdrop of Bangladesh border guards saying that more than 11,000 Rohingya refugees crossed by land on Monday alone into south-eastern Bangladesh through several points, the Office of the High Commissioner of Refugees (UNHCR) spokesperson Adrian Edwards told reporters at today’s regular press briefing in Geneva that “UNHCR is working with the Bangladesh authorities on a transit centre for a potential refugee influx over the coming days.”

UNHCR sources say that many of the new refugees came from the Buthidaung area in Myanmar’s northern Rakhine state. Some said they fled torching and killings back home; one boy was seen with a big gash across his neck. Others said they left in fear ahead of anticipated violence.

To reach Bangladesh, they walked for up to 14 days. Many were carrying children and baskets containing whatever they could pack at short notice. They waded through marshland before swimming across the Naf river that divides the two countries. Many women and children could not swim and had to ride piggyback on volunteer swimmers. Some used inflated plastic bags and UNHCR tarpaulins as makeshift flotation devices.

“The new arrivals have now been moved away from the border areas into established camps and settlements in the Kutupalong and Balukhali area. UNHCR has trucked in plastic sheets and jerry cans for water. We are also coordinating with the government and partners to provide urgent services – food, water and healthcare – to these new refugees,” flagged Mr. Edwards.

In preparation for the possible new arrivals, UNHCR’s Government counterpart, the Refugee Relief and Repatriation Commission (RRRC), will lead preparedness activities with UNHCR in coordination with partners, including UNICEF, IOM, WHO and the World Food Programme (WFP). 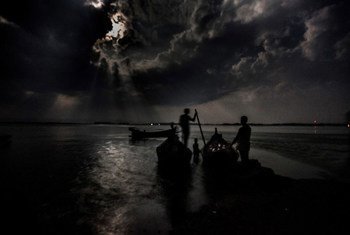 9 October 2017
At least 13 Rohingya refugees, 11 of them young children, fleeing violence in Myanmar have drowned when the fishing boat they were on capsized in stormy weather, the United Nations migration agency said.