Warning that the horrific accounts of rape and sexual assault against Rohingya women and girls fleeing unrest in Myanmar could be “just the tip of the iceberg,” the United Nations Population Fund (UNFPA) underscored the need to ensure that such violence is prevented and called for additional resources so that it can reach all those in need of assistance.

“Gender-based violence, including rape and sexual assault, is a key concern that has emerged from the ongoing humanitarian crisis,” said UNFPA in a news release today.

The UN agency noted that it has already provided a range of services, including medical and psychosocial counselling assistance, to more than 7,000 Rohingya women refugees.

However, many victims have not reported their ordeal out of concerns over safety, confidentiality, shame and stigma, it added.

“This is what makes it challenging to come up with accurate numbers of gender-based violence survivors.”

According to UNFPA, the lead UN agency on addressing gender-based violence in humanitarian crisis and emergencies, more than 480,000 Rohingya refugees – over half of them women and girls – have poured into Bangladesh’s Cox’s Bazar since August 25, having fled their homes since violence erupted in Myanmar’s northern Rakhine province.

Some 120,000 among them are women of reproductive age and 24,000 are either pregnant or breastfeeding.

UNFPA has set up five ‘Women Friendly Spaces’ – areas which women can access at anytime for safety or to access information, education, support or other services – and plans to scale it up to fifteen by the end of the year.

It has also helped set up community watch groups and medical camps with psychosocial counselling assistance amid what it noted are “incredibly challenging circumstances.”

However, given the scale of the crisis, UNFPA and other UN agencies as well as partners, are struggling in need of resources. UNFPA alone needs an additional $13 million to meet the demand for services over the next six months.

Humanitarian crises across the world suffering the blight

The scourge of sexual and gender violence, unfortunately, is not only limited to the Rohingyas who fled Myanmar. Humanitarian crises globally are affected, with women and girls disproportionately affected, their specific needs not addressed adequately.

And it is therefore of paramount importance, underscored UNFPA, that each and every survivor of gender-based violence who needs such services must receive them in an environment that respects their right to self-determination, privacy and confidentiality, ensuring safety and, in so doing, helping them regain or strengthen their sense of dignity.

“All women and girls, regardless of their ethnicity or religious affiliations, must have access to health care and other essential services without discrimination, and they must be protected from all forms of violence, including sexual assault,” emphasized Natalia Kanem, the Acting Executive Director of UNFPA.

“The health and safety of women and girls must be protected.” 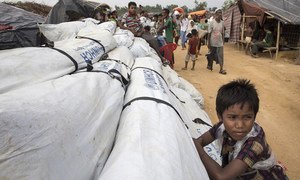 A month on from counter-terror operations following attacks on police outposts in Myanmar’s Rakhine province, seven United Nations rights experts have called on the Government to stop all violence against the minority Muslim Rohingya community as well as on the global community to “go beyond” statements and take action to save them.