Highlighting multifaceted threats to aviation security in the context of international peace and security, the head of the United Nations civil aviation body urged greater cooperation among Member States, at all levels, to make global aviation security more effective.

“We must find a way to identify and judiciously share essential elements of information necessary to implement appropriate measures at the proper level,” Fang Liu, the Secretary-General of the International Civil Aviation Organization (ICAO), told the Security Council today at its meeting on threats to international peace and security caused by terrorist acts.

In her briefing, Ms. Liu informed the 15-member Security Council on the new ICAO Global Aviation Security Plan, which focuses extensively on the threat of terrorism to civil aviation and aims to enhance the effectiveness and sustainability of global provisions, and the sustainable implementation of preventative measures.

The Global Plan, which she referred to as a major milestone for civil aviation security contributing to the UN global counter terrorism strategy, has five priority areas: enhancing risk awareness and response; establishing a better-defined security culture; improving technological resources and fostering innovation; improving oversight and quality assurance; and increasing cooperation and support.

“It will only be by virtue of sustained political will, especially at the highest levels of governments and industry, that the [Global Plan] will succeed,” the IACO chief added.

Concluding her remarks, the head of ICAO also urged the Security Council to allocate a portion of the counter terrorism funds as well as to encourage UN Member States to increase their contributions to aviation security projects, in particular for capacity building and training to enhance the effective implementation of ICAO Standards.

♦ Receive daily updates directly in your inbox - Subscribe here to a topic.
♦ Download the UN News app for your iOS or Android devices.
Security 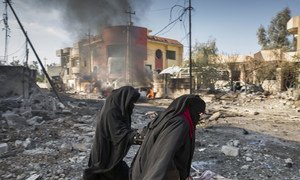