The only world that is safe from the use of nuclear weapons is a world that is completely free of them, Secretary-General António Guterres said today as the United Nations marked the International Day for the Total Elimination of Nuclear Weapons.

“A world free of nuclear weapons is a global vision that requires a global response,” Mr. Guterres told a high-level General Assembly meeting held in commemoration of the International Day, observed annually on 26 September.

Although the goal of such a world is universally held, he said, it has lately been subject to numerous challenges, including a series of provocative nuclear and missile tests conducted by the Democratic People’s Republic of Korea.

He added that the States possessing nuclear weapons have a special responsibility to lead by taking concrete steps, including those agreed at various review conferences of the Treaty on the Non-Proliferation of Nuclear Weapons (NPT).

Expensive campaigns to modernize nuclear weapons – combined with the absence of planned arsenal reductions beyond the new Strategic Arms Reduction Treaty (START) between Russia and the United States – make it difficult to see how disarmament can make progress, Mr. Guterres said, warning against misguided assertions that prevailing security conditions do not permit disarmament initiatives.

“It is true that we live in challenging circumstances, but this can be no excuse for walking away from our shared responsibility to seek a more peaceful international society,” he said.

The General Assembly declared 26 September as the International Day devoted to furthering the objective of the total elimination of nuclear weapons through a resolution adopted in December 2013.

Also addressing the event was Assembly President Miroslav Lajčák, who noted that thousands of nuclear warheads still exist and they are being stored across three different continents. More than half of the world’s population lives in countries which have nuclear capabilities, or are member of nuclear alliances, he added.

Since the designating the International Day, the world has witnessed three nuclear tests.

“One nuclear test is one too many. Six nuclear tests in the 21st century is, frankly, alarming. So too is the reckless rhetoric we are witnessing. It can bring us all to the verge of a cliff, which we cannot afford to fall off,” he said.

Last week, the Treaty on the Prohibition of Nuclear Weapons was opened for signature. Not everyone agrees that this was the right step to take, but it demonstrates a determination, which is beyond dispute, he said.

“We can live in a nuclear-free world, as long as we all believe that it is possible. And as long as we are all willing to work to make it possible,” he concluded. 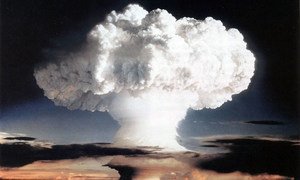