<a href=http://bit.ly/2y4DRdo>Ben Parker/IRIN</a>
Destruction left behind in the aftermath of Hurricane Maria on the island of Dominica.
25 September 2017

A United Nations disaster assessment official visiting the small island nation of Dominica, which was battered by Hurricane Maria, said today that an estimated 60,000 to 65,000 people, or 80 per cent of the total population, have been affected and that food and water are the most immediate needs.

“There is a big, big urgency to get water and food,” said Sergio Da Silva, UN Disaster Assessment and Coordination (UNDAC) team leader, who spoke to reporters in New York by phone from the ground, adding that inaccessibility to remote areas has made it difficult to ascertain just how many people have been affected.

“And when you fly over, you see all the trees are down…debris everywhere and people are homeless,” he added.

Created in 1993, UNDAC is designed to help the UN and governments of disaster-affected countries during the first phase of a sudden-onset emergency.

Maria made landfall on the tiny island of 72,000 on the evening of 18 September, with maximum sustained winds of nearly 160 miles per hour.

Mr. Silva said he has been in Dominica since Thursday, assisting in the coordination of incoming international relief.

Along with food and shelter, getting clean water is a priority, he said, as water in the river is not consumable. Work is also under way to restore hospitals.

Delivering humanitarian aid to remote villages remains a huge challenge as many roads were destroyed.

♦ Receive daily updates directly in your inbox - Subscribe here to a topic.
♦ Download the UN News app for your iOS or Android devices.
Dominica 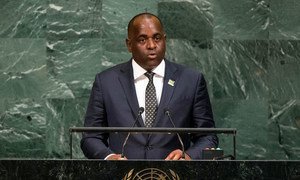 Pleading with all countries in the United Nations General Assembly – large and small, rich and poor – to come together to save our planet, the Prime Minister of Dominica, where the landscape, ravaged by back-to-back hurricanes “resembles a warzone,” said his and other islands in the Caribbean need help now to build their homelands back better.