Warning that Africa is beset by the double scourge of the disparity of the global economy and illicit financial outflows, South African President Jacob Zuma today called on the United Nations to play a central role in tackling both issues, which are major obstacle to full development

“The current structure of the global economy continues to deepen the divide between the global north and global south,” he told the General Assembly’s 72nd annual general debate. “While a few enjoy the benefits of globalization, the majority of the world’s peoples still live in abject poverty and hunger, with no hope of ever improving their living conditions.

“We need the political will and commitment from global leaders to address the challenges and obstacles posed by this untransformed structure of the global economy, if we hope to achieve the goals and ambitions of Agenda 2030,” he added, referring to the Sustainable Development Goals (SDGs) which aim to eliminate a host of socials ills, such as hunger and diseases, all by 2030.

Mr. Zuma stressed that Africa continues to lose a significant chunk of its resources through illicit

financial outflows, billions of dollars which would otherwise be used to develop the continent, and provide education, healthcare, housing and other critical basic needs, with money laundering, corruption, and transfer pricing by among multinational companies among the biggest challenges.

Nations, and the International community at large to address this phenomenon,” he said.

“Developed countries in particular, have a historic and moral obligation to contribute to achieving a fair global economic environment, and to eradicate the scourge of illicit financial flows from the continent. The UN should also be at the centre of addressing this problem.”

Also addressing the Assembly today, Hage G. Geingob, the President of Namibia, highlighted the importance of a “development that reaches all people in an equitable manner”.

“Growing income disparities, between nations and within nations, poses the greatest threat for peace within countries and globally,” he said the Assembly’s 72nd annual general debate, stressing that as long as there’s poverty and income inequality in Namibia, lasting peace and social justice would not be achieved.

President Geinbog also noted the Namibian support of gender equality and the importance of including women and girls in development, as well as the youth. “We, in Namibia, believe that gender equity is equally important for a stable and harmonious society,” he added, recognizing also the contribution of women in promoting global peace.

He also expressed the importance of seeing Africa as an “important and equal partner of the international community, with a contribution to make,” instead of “only a source of primary commodities”.

In the same vein, Arthur Peter Mutharika, the President of Malawi underscored that it is the responsibility of the current generation of world leaders to ensure that their actions offer hope of a better future to the next generation.

“The adoption of the 2030 Agenda reflects our global resolve to address the most pressing challenges in the spirit of the human collaboration,” he said, adding that unity among nations is indispensable.

“The cause that rallies us together is that we are one humanity, on one planet. This is the tie that binds us all. All our differences and national interests are secondary to this overriding cause,” he declared.

In particular, the President noted the growing impact of climate change, such as through natural disasters, on the most vulnerable and that his country – where 85 per cent of the populations depend on agriculture – crop failures are a tragedy.

“Therefore,” he added, “let me appeal to all Member States to consider strategies and avenues for collaboration for us to adapt to the fast-changing climate.”

In conclusion, he also spoke against nuclear weapons, noting that it remains the existential threat to humanity, and said that the idea of keeping such weapons “questions the wisdom of mankind.”

Expressing his country’s categorical disapproval of the spread of ballistic missile technology, he added: “This should not be tolerated in any way by any Member State of the UN.”

Also today, expressing his country’s commitment to implementing the SDGs, King Mswati III of Swaziland, highlighted national initiatives to mainstream and localize the global development goals through awareness raising, consultations and education at all levels.

“[We have] also integrated the goals into the National Development Strategy, which was revised to capture its linkages with the SDGs and the African Union Agenda 2063,” he said.

In his address, King Mswati III, also underlined the urgency to mitigate the challenges arising from climate change, which is already showing its impact through severe droughts, new patterns of pest infestation, as well as hurricanes, floods and landslides.

“We urge donors and all nations, to not only fulfil their pledge towards the ‘green fund,’ but also to adopt policies to strike the correct balance between production of essential products and environmental sustainability to protect and preserve the world for future generations.”

Further in his address, the leader of Swaziland also spoke of social development in his country, noting progress in tackling poverty, hunger and disease, and improving the lives of the people.

In conclusion, he also highlighted the importance of South-South cooperation as well as capacity building, enhanced resources and technology transfer to help lower-middle-income countries and to least developed countries.

“I can say that since 2016, Madagascar raised $6.4 billion in global investment and aid from institutional donors,” the President announced in his address to the General Assembly.

This feat, he explained was made possible through the easing of political conflicts in his country.

He added that this injection of funds allowed Madagascar to start investing in the key sectors of its economy and for the future of the country.

Thanks to this funding, Madagascar is now working to reduce poverty in a sustainable manner, reaching 92 per cent of the population, he noted, highlighting that policies setting up basic infrastructure in several sectors is also starting to bear fruit, including agriculture, livestock, energy and fisheries.

The President also announced health projects, including the launching of a universal health coverage scheme, the reduction of maternal and infant mortality through a strengthening of the network of health centres, an increase in the Government budget on nutrition, and an advanced epidemiological surveillance system that would allow the Government to monitor some 28 epidemic-prone diseases in real time.

“One year to go to the 2018 Presidential elections, after hard work and continuous determination, I can say that Madagascar has reached a milestone and a stage that now allow room for hope,” the country’s leader expressed. 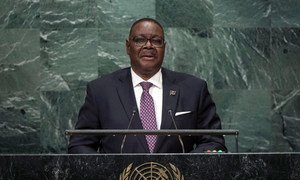 In their respective addresses to the United Nations General Assembly today, Southern African leaders stressed the importance of regional efforts, such as within the African continent through the African Union (AU) to realize a better and sustainable future for all.