Citing a litany of world crises and quoting directly from victims of man-made and natural disasters, French President Emmanuel Macron today called for a return to the optimism and universal values that inspired the founding of the United Nations 72 years ago, taking into the account the new realities of the 21st century.

“In the 21st century we need a responsible and efficient United Nations endowed with the means to overcome its owns blockages when hundreds of thousands of lives are at stake,” he told the 72nd UN General Assembly on the opening day of its general debate, calling on the UN Security Council’s five permanent members to forgo their right of veto in cases of mass atrocities.

From Syria, Iraq and Libya to Mali and Myanmar, Mr. Macron denounced extremism, terrorism and human rights abuses, called for compassion for refugees and migrants and warned that the root causes behind these disasters must be addressed through development, education and elimination of hunger.

Citing the fate of a compatriot on St. Martin, whose house was destroyed by Hurricane Irma which recently devastated the Caribbean island, Mr. Macron underscored the vital importance of the 2015 Paris Agreement limiting the emission of global warming greenhouse gases, recognising the United States decision to leave it, but adding that “the door will always be open” for the US to return.

Turning to the nuclear threats facing the world, he called for negotiations and a political solution in the Democratic Republic of Korea’s (DPRK) “furious” race for nuclear weapons, while praising the 2015 accord limiting Iran’s nuclear capabilities. It would be “a grave error” to renounce or fail to respect it, he said, adding he told both US and Iranian leaders that yesterday.

♦ Receive daily updates directly in your inbox - Subscribe here to a topic.
♦ Download the UN News app for your iOS or Android devices.
General Assembly|france 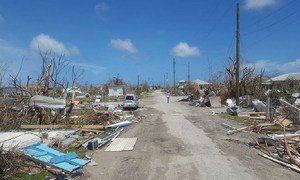