Workers on an irrigation construction site in Mawlamyaingyun, Myanmar, in May 2013. Photo ILO/M. Crozet
19 September 2017

More than 40 million people around the world were victims of modern slavery – forced labour and forced marriage – in 2016, a United Nations study has found, revealing the true scale of such practices that disproportionately affect women and girls.

Of the total, almost 29 million – or 71 per cent – are women and girls. Women represent 99 per cent of victims of forced labour in the commercial sex industry and 84 per cent of people in forced marriage.

A separate ILO study, Global estimates of child labour: Results and trends, 2012-2016, confirmed that about 152 million children, aged between 5 and 17, were subject to child labour.

Child labour remains concentrated primarily in agriculture, at 70.9 per cent. Almost one in five child labourers, or 17.1 per cent, work in the services sector while 11.9 per cent of child labourers work in industry.

“The world won’t be in a position to achieve the Sustainable Development Goals unless we dramatically increase our efforts to fight these scourges,” said ILO Director-General Guy Ryder.

“These new global estimates can help shape and develop interventions to prevent both forced labour and child labour,” he added.

♦ Receive daily updates directly in your inbox - Subscribe here to a topic.
♦ Download the UN News app for your iOS or Android devices.
modern slavery 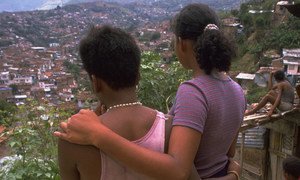 Criminal groups feed off the instability created by conflicts, and as links between wars, trafficking and migrant smuggling become more widely known, the United Nations is calling on the international community to act now to help and protect trafficking victims and to end this crime forever.