“Limited national progress has been made in the fight against NCDs – primarily cardiovascular and chronic respiratory diseases, cancers and diabetes – which are the world’s biggest killers,” noted the UN World Health Organization in a news release today.

According to estimates, 15 million people aged 30-70 succumb to these diseases annually. Furthermore, the latest edition of the WHO Non-communicable Disease Progress Monitor shows that progress around the world to control such conditions been uneven and insufficient, and over three-fourth of the deaths in low- and middle-income countries.

“Bolder political action is needed to address constraints in controlling NCDs, including the mobilization of domestic and external resources and safeguarding communities from interference by powerful economic operators,” said Tedros Adhanom Ghebreyesus, the WHO Director-General, in his foreword to the Progress Monitor.

The findings also reveal that the world is not on track to meet one of the key health targets of the Sustainable Development Goals (SDGs) on reducing premature mortality from NCDs by a third by 2030.

Underscoring that “the window of opportunity is closing,” on being able to save increasing number of people, particularly children and adolescents, Douglas Bettcher, the Director the Department for Prevention of NCDs at WHO urged: “If we don’t take action now to protect people from NCDs, we will condemn today’s and tomorrow’s youth to lives of ill-health and reduced economic opportunities.”

Findings contained in this year’s edition will form the basis for a WHO study later this year which will be released ahead of the third UN High-level Meeting on NCDs (to be held in 2018). 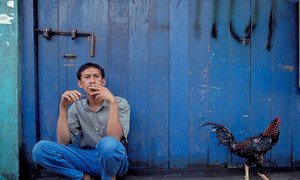