UN Mission in Colombia
UN observers removing the last of more than 8,112 guns carried by the FARC-EP.
14 September 2017

The Security Council today approved the Secretary-General António Guterres' recommendations regarding the size, operational aspects and mandate of the United Nations Verification Mission in Colombia.

Unanimously adopting a new resolution, the Council welcomed the Secretary-General's recent report, which states that the Mission would begin its activities on 26 September.

Further to that report, the Mission will aim to consolidate the peace process and assist the parties in their efforts to ensure that full social, economic and political reintegration of former Revolutionary Armed Forces of Colombia-People's Army (FARC-EP) members is achieved “in the shortest time possible,” and that the rural areas of the country hardest hit by the conflict can recover the peace and security to which their communities aspire.

That Mission had been responsible for monitoring and verifying the laying down of arms by the FARC-EP and the bilateral ceasefire and cessation of hostilities between the Government and the FARC-EP. In November last year, the two sides signed a peace deal, ending a 50-year conflict.

In a briefing to the Security Council last week, the Secretary-General's Special Representative for Colombia, Jean Arnault, said that as the Verification Mission prepares to begin its activities, he hoped that, with the Council's support, the new operation should be able to strengthen the country's confidence for a stable peace.

“Over the past months, the peace process between the Government and the Revolutionary Armed Forces of Colombia (FARC-EP) has slowly but steadily tipped the scales in favour of hope,” he said, noting that the formal transformation of the FARC-EP into a political party highlighted the momentous developments that have taken place in the country over the past year. 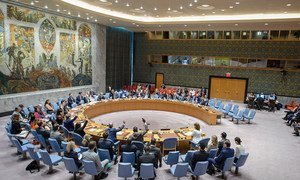