OCHA/Philippe Kropf
The city of Sa’ada in the Sa’ada Governorate has been heavily hit by airstrikes during the conflict in Yemen (file).
5 September 2017

“An international investigation would go a long way in putting on notice the parties to the conflict that the international community is watching and determined to hold to account perpetrators of violations and abuses,” said UN High Commissioner for Human Rights Zeid Ra'ad Al Hussein in a news release on the report.

“I appeal to all the parties to the conflict, those supporting them and those with influence over them to have mercy on the people of Yemen, and to take immediate measures to ensure humanitarian relief for civilians and justice for the victims of violations,” he added.

According to the report, which records violations and abuses of human rights and international humanitarian law since September 2014, such acts continue unabated in Yemen, with civilians suffering deeply the consequences of an “entirely man-made catastrophe.”

Between March 2015, when the Office of the UN High Commissioner for Human Rights (OHCHR) began reporting on civilian casualties, and 30 August, at least 5,144 civilians have been documented as killed and more than 8,749 injured.

Children accounted for 1,184 of those who were killed and 1,592 of those injured. Coalition airstrikes continued to be the leading cause of child casualties as well as overall civilian casualties. Some 3,233 of the civilians killed were reportedly killed by Coalition forces.

The report states that the past year witnessed airstrikes against funeral gatherings and small civilian boats, in addition to markets, hospitals, schools, residential areas, and other public and private infrastructure.

The Popular Committees affiliated with the Houthis and the army units loyal to former President Abdullah Saleh (the Houthi/Saleh forces) were responsible for some 67 per cent of the 1,702 cases of recruitment of children for use in hostilities.

The report stresses that “the minimal efforts towards accountability in the past year are wholly insufficient to respond to the gravity of violations and abuses continuing every day in Yemen,” adding that the National Commission established to investigate human rights violations in Yemen is not perceived to be impartial.

The report also found that the governorates most affected by the conflict were Aden, Al-Hudaydah, Sana'a and Taizz.

The humanitarian crisis – with nearly 18.8 million people in need of humanitarian aid and 7.3 million on the brink of famine – is a direct result of the behaviour of parties to the conflict, including indiscriminate attacks, attacks against civilians and protected objects, sieges, blockades and restrictions on movement, the report states.

“In many cases, information obtained…suggested that civilians may have been directly targeted, or that operations were conducted heedless of their impact on civilians without regard to the principles of distinction, proportionality and precautions in attack. In some cases, information suggested that no actions were taken to mitigate the impact of operations on civilians,” the report states. 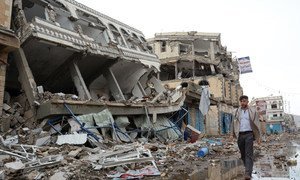 Reiterating that attacks targeting civilians are prohibited under international law, the United Nations human rights office today confirmed dozens of casualties in airstrikes on villages near the capital, Sana'a.