Hailing from Sri Lanka, the second-ever United Nations Youth Envoy is no stranger to rolling up her sleeves to get things done.

Before taking on her role as UN Youth Envoy, 26-year-old Jayathma Wickramanayake worked diligently in her mother country to transform the youth development sector. From 2013 to 2015, she served as a Senator at the Sri Lankan Youth Parliament and from 2016 to 2017 as Secretary to the Secretary-General of the Parliament of Sri Lanka.

Now working at the UN, her dedication to including youth globally comes out in force as she vows to do everything in her capacity to strive towards making the UN an inclusive system in which all youth is welcomed.

Speaking to UN News, she stressed that as Youth Envoy, she wants to ensure that all youth have a home at the United Nations.

UN News: Can you elaborate on your role as UN Youth Envoy?

Jayathma Wickramanayake: Since my school days, I have been very active in community work – volunteering both in and outside of school. When I entered university, the Sri Lankan Ministry of Youth Affairs organized the first-ever competition to select emerging young leaders in the country. I became the runner up.

I was then invited by the Youth Ministry and the UN Country Team in Sri Lanka to contribute to different programmes and policies being drafted at that time, such as the National Youth Policy of Sri Lanka, the Youth Employment Action Plan and the World Health Organization’s Noncommunicable Disease Prevention Progamme.

Little by little I became introduced to the UN, including by becoming part of the UN Volunteer force.
In 2012, when Sri Lanka started the Youth Delegate Programme, I was selected as one of my country’s first Youth Delegates to participate in the UN’s 69th General Assembly. 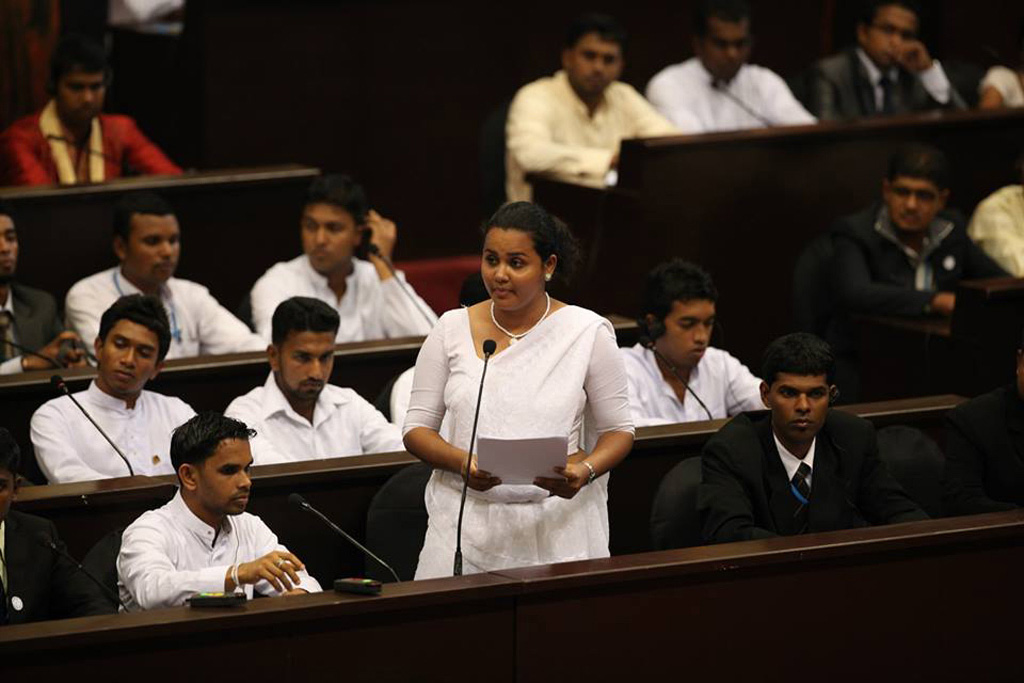 In preparation, I travelled around Sri Lanka for a month, speaking with different young people from a variety of communities to formulate a statement on the issues they wanted the UN to hear, which I subsequently delivered to the Third Committee [Social, Humanitarian and Cultural Affairs Committee].

As I was finishing my tenure as Youth Delegate in 2013, Sri Lanka was preparing to host the 2014 World Youth Conference, for which I was appointed to the International Youth Task Force that advised on its programme, proceedings, agenda, and declaration.

At that time, 74 million youth globally were unemployed and there was a huge gap in terms of school-to-work transition, which underscored a need for skills development.

For about one year and a half I worked on the Conference with a team of energetic young people from 10 parts of the world, including 10 Sri Lankans.

I then worked closely with the UN and the Sri Lankan government to adopt the resolution to declare World Skills Day.

Back in Sri Lanka, I started a grass roots youth organization with other Sri Lankan former UN Youth Delegates called Hashtag Generation to build the capacity of young people to participate in politics. 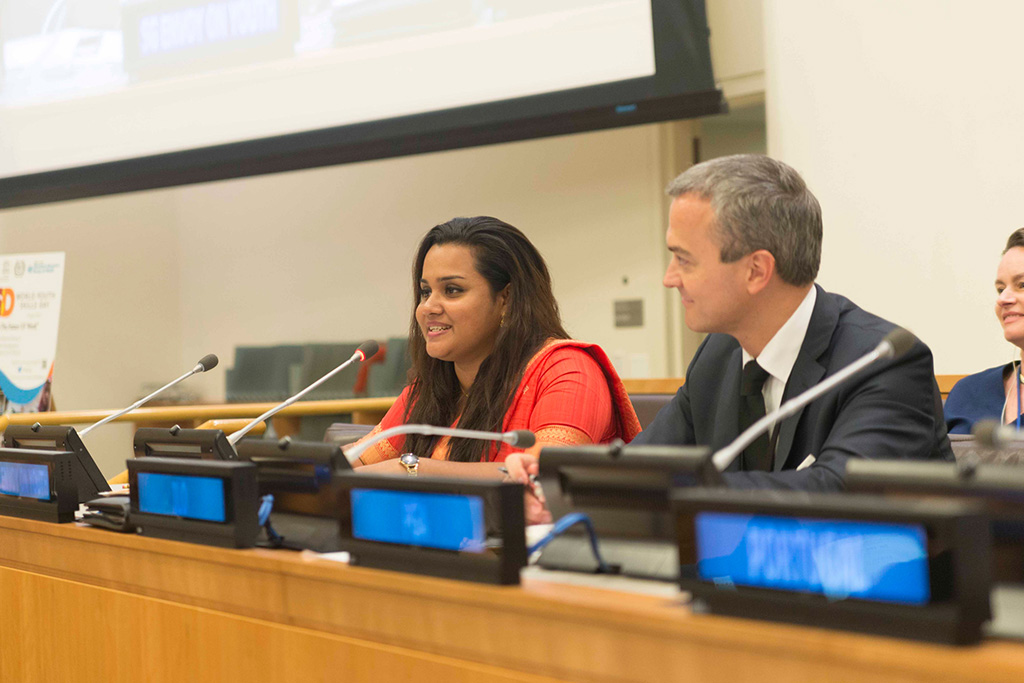 UN News: What inspired you to take on the role of UN Youth Envoy?

Jayathma Wickramanayake: I served as Youth Delegate during the formulation process of the SDGs [Sustainable Development Goals]. In the UN, I saw how young people came together with diverse ideas, proposals and plans of action to weigh-in on framing the future development agenda.

I also recognized that there is a need for the UN to engage young people and get their perspective on how the world should look in 2030 because, ultimately, it is the youth who will lead the implementation of this agenda.

I think this is a time in history that we can really make a change because the future will depend on the implementation of the SDGs, and young people will have a crucial role to play.

The new Secretary-General’s vision, which is to place youth at the centre of the UN’s work, also inspired me to become engaged in the process as the Youth Envoy.

UN News: What are some your goals as UN Youth Envoy?

Jayathma Wickramanayake: The terms of reference under the Secretary-General’s vision for young people focuses on the meaningful participation of youth across the four pillars of the UN’s work, namely development; human rights; peace and security; and humanitarian action.

My goal would be to ensure that young people have a voice in all of these processes at the UN, with a special focus on the participation of girls and young women.

Institutionalizing youth participation in the UN is important because, as a Youth Delegate, I saw young people working hard on the ground – but without access to UN discussions that institutionalize youth participation. Instead, they often participate in very informal ways through their networks, non-governmental organization or during side events at forums that take place at the UN.

There is a need to formally recognize youth as partners in core processes at the UN. For example, when a government brings a delegation to negotiate a declaration on, say, peace and security, we can always include a youth delegate – ensuring that there is space for young people in the meeting room.

UN News: You have been in office for less than a month. Can you tell us about what you have already done in your first weeks here?

Jayathma Wickramanayake: It was quite iconic because I started my tenure as the Youth Envoy on 15 July, World Youth Skills Day, for which I had worked to adopt the pertinent resolution.

That and the High Level Political Forum (HLPF), where my office in partnership with other UN actors and Member States organized many events around youth and skills development and the engagement of young people in voluntary national reviews of the SDGs.

So, my first week was full of activities around the HLPF and gave me the opportunity to meet different stakeholders who were in town at that time.

On my fourth day in office, I had a special meeting with all the youth representatives, who were in New York for the forum. I was able to get their ideas of how they see the role of Youth Envoy and what they expect from me. It was a very good experience.

UN News: What has surprised you about the job so far?

Jayathma Wickramanayake: Not sure I would call it a surprise, but in this role, every day I meet young people who work tirelessly on the ground, who sometimes sacrifice their lives, compromise so much for causes that they believe are true.

It really inspires me, and on a daily basis. I think that is the best part of this job!

UN News: What do you foresee as your biggest challenge?

Jayathma Wickramanayake: There is a growing rhetoric about young people’s participation in formal processes. While everyone acknowledges that they should have a seat at the table, when it comes to implementing this, most often we take a step back. We find excuses not to include youth in discussions about investing in young people, or to find avenues for young people from different backgrounds to participate.

I see the challenge is actually converting this talk to work. 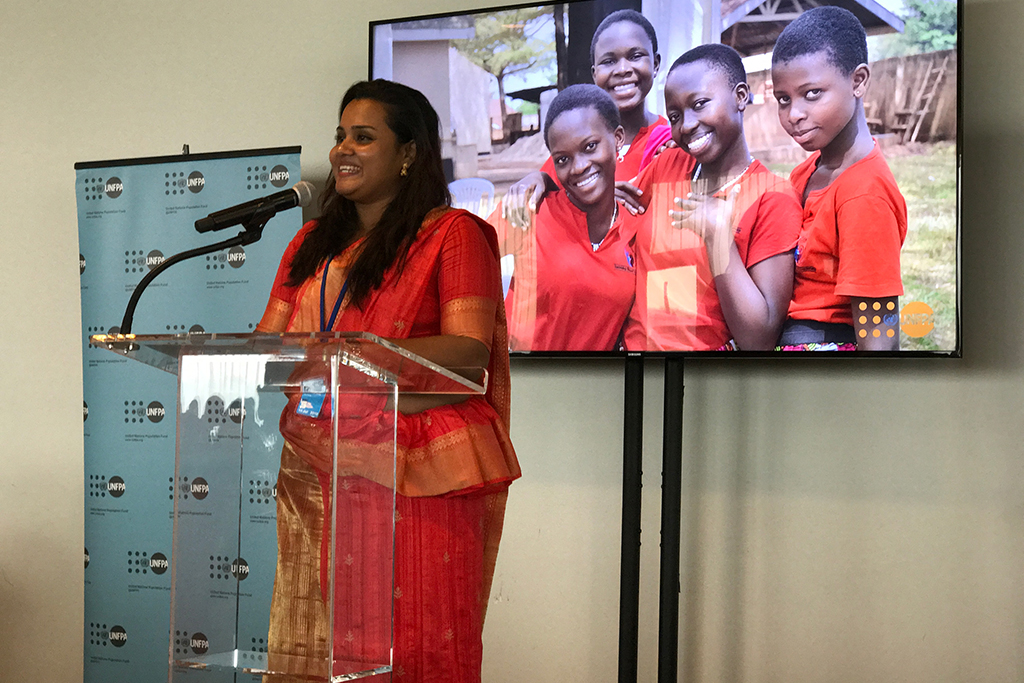 The Youth Envoy addresses a High-Level Luncheon on the demographic dividend – organized by the President of the General Assembly, President of Economic and Social Council and the UN Population Fund. Credit: Eddie Wright

UN News: What changes do you think the UN needs to make in order to reach and be more relevant in young people's lives?

Jayathma Wickramanayake: There are two approaches that we can adopt. Firstly, I think the UN has a responsibility to go to young people and meet them where they are. We cannot expect all youth from different communities, religions and ethnic backgrounds to come to the UN.

For example, this International Youth Day, 12 August, I am celebrating with young people in Iraq, where the theme of “Youth Building Peace” is very relevant in their national context. I come from a region that is constantly affected by conflict, and have personally seen the effects it has had on young people. In Iraq, I will meet with close to 1,000 youth, discussing the problems they are facing.

There, I will also convene meetings with the Government and other stakeholders to see how we can resource youth development in Iraq and devise methods to constantly and substantively engage young people in preventing conflicts as well as in post-conflict reconciliation activities.

There is a need to see young people not as a liability but as an opportunity.

Most often the UN jargon is not very familiar to the young people doing good work in advancing the lives of youth in their villages and communities. By taking the UN closer to young people I do not necessarily mean physically, but through new technologies, such as social media, to connect with youth in a language they can understand.

The second approach is to have the UN system look at young people. Today they comprise more than half of the world’s population – the largest youth population in the history of the world. There is a need to see young people not as a liability but as an opportunity, and to see how we can proactively engage them in all discussions, at all levels.

Deputy Secretary-General Amina Mohammed today called for strengthening the relationship between the African Union (AU) and the United Nations to deliver on promised development for Africa's youth.