More than 600,000 displaced Syrians returned home in the first seven months of 2017, the United Nations migration agency and partners have found.

Findings by the International Organization for Migration (IOM) and partners indicate that 84 per cent of the people returning had been displaced within Syria, and the rest returned from Turkey, Lebanon, Jordan and Iraq. Refugees returning from Turkey and Jordan reportedly returned mainly to Aleppo and Al Hasakeh Governorates.

An estimated 27 per cent of the returnees stated that they did so to protect their assets or properties and 25 per cent referred to the improved economic situation in their area of origin.

Aleppo city received the most returnees.

Reports also find that 97 per cent returned to their own house, 1.8 per cent are living with hosts, 1.4 per cent in abandoned houses, 0.14 per cent in informal settlements and 0.03 per cent in rented accommodation.

About 83 per cent and 80 per cent of returnees said they have access to food and household items, respectively. But only 41 per cent have access to water and 39 per cent to health services – a dangerously low level – as the country's infrastructure has been extremely damaged by the conflict.

While trends of returns increase, Syria continues to witness high rates of displacement. From January to July 2017, an estimated 808,661 people were displaced, many for the second or third time, and over 6 million in total currently remain displaced within the country.

Returns have mainly been spontaneous but not necessarily voluntary, safe or sustainable. As such, they cannot, at present, be considered a durable solution. 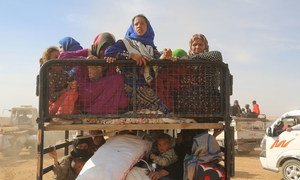 The United Nations humanitarian wing is deeply concerned about the safety and protection of the thousands of civilians inside Raqqa city, many of them women and children, who are caught in the crossfire of the ongoing conflict, a UN spokesperson said today.