OCHA/Ivo Brandau
A former site for internally displaced persons (IDPs) near Kalemie, Democratic Republic of the Congo (DRC) was burned down when it was attacked by a militia group in early July.
4 August 2017

Violence in the Kasai provinces of the Democratic Republic of the Congo (DRC) appears to be taking on an increasingly disturbing ethnic dimension, a United Nations human rights wing has warned, citing testimonies that Government forces have led ethnicity-based attacks.

?"Survivors have spoken of hearing the screams of people being burned alive, of seeing loved ones chased and cut down, of themselves fleeing in terror. Such bloodletting is all the more horrifying because we found indications that people are increasingly being targeted because of their ethnic group,?" said UN High Commissioner for Human Rights Zeid Ra?fad Al Hussein in a news release from his Office (OHCHR).

?"Their accounts should serve as a grave warning to the Government of the DRC to act now to prevent such violence from tipping into wider ethnic cleansing,?" he added, calling on the Government to take all necessary measures to fulfil its primary obligation to protect people from all ethnic backgrounds in the greater Kasai area.

The report is based on interviews with 96 people who had fled to neighbouring Angola to escape the violence in Kamonia territory in Kasai.

The UN team was able to confirm that between 12 March and 19 June, some 251 people became the victims of extrajudicial and targeted killings, including 62 children, of which 30 were aged under eight.

Interviewees indicated that local security forces and other officials actively fomented, fueled, and occasionally led, attacks on the basis of ethnicity.

The UN Mission in the DRC has identified at least 80 mass graves in the Kasais.

The fighting between the Kamuina Nsapu militia and the Government began in August 2016. The UN team was able to confirm that another militia, called the Bana Mura, was formed around March/April 2017 by individuals from the Tshokwe, Pende and Tetela ethnic groups. It was allegedly armed and supported by local traditional leaders and security officials, including from the army and the police, to attack the Luba and Lulua communities who are accused of being accomplices of the Kamuina Nsapu.

According to the report, the Bana Mura allegedly undertook a campaign aimed at eliminating the entire Luba and Lulua populations in the villages they attacked. In many of the incidents reported to the team, soldiers of the Armed Forces of the Democratic Republic of the Congo, known by its French acronym FARDC, were seen leading groups of Bana Mura militia during attacks on villages.

This report will be put at the disposal of the international experts, as well as any other judicial institution addressing the human rights situation in the Kasais, in an effort to advance accountability efforts in this regard. 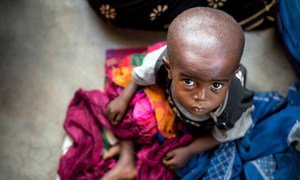 Waves of violent conflict in the Greater Kasai region of the Democratic Republic of the Congo (DRC) have forced more than one million people, including hundreds of thousands of children from their homes, the United Nations Children's Fund (UNICEF) has reported.