Secretary-General António Guterres today welcomed the move by the Republic of Korea to lower tensions on the Korean Peninsula, his spokesperson said.

“The Secretary-General welcomes the proposal by the Republic of Korea to reopen inter-Korean communication channels and encourages the leadership of the Democratic People’s Republic of Korea (DPRK) to respond positively,” UN Deputy Spokesperson Farhan Haq told journalists in New York.

The comments follow Monday’s announcement by the Republic of Korea that its Defence Ministry had proposed to meet with DPRK representatives with the goal of ending hostilities.

“The absence of communication channels with the DPRK could be dangerous,” the spokesperson said in today’s press briefing, echoing the statement Mr. Guterres made on 28 April at the Ministerial-level Security Council meeting on non-proliferation.

At that time, Mr. Guterres said that “we need to avoid miscalculation and misunderstanding . We need to act now to prevent conflict and achieve sustainable peace.”

He urged DRPK to refrain from further testing, comply with relevant Security Council resolution, and explore the resumption of dialogue.

“This means reopening and strengthening communication channels, particularly military to military, to lower the risk of miscalculation or misunderstanding,” Mr. Guterres said in that speech. 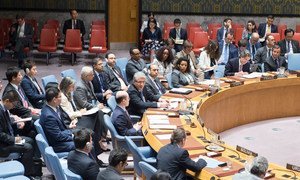 Briefing an emergency meeting of the Security Council convened following the launch by the Democratic People's Republic of Korea (DPRK) of a ballistic missile of intercontinental range, a senior United Nations official reminded the Council of the importance of separating political and humanitarian concerns as it considers a response to the situation.