Senior United Nations officials today called for regional and international support to stabilize newly liberated Mosul and to create conditions for peace and development throughout Iraq.

“The historic liberation of Mosul should not conceal the fact that the road ahead is extremely challenging,” the Special Representative of the Secretary-General for Iraq, Ján Kubiš, told the Security Council.

He praised the Iraqi security forces and international partners for “an exceptional effort” to save and protect civilians during the military drive to liberate the Iraqi city from the Islamic State of Iraq and the Levant (ISIL), also known by its Arabic acronym, Daesh, and for showing a readiness to be held accountable for violations.

The effort was “in stark contrast” to ISIL, which showed “absolute disregard for human lives and civilization” by booby-trapping and destroying homes and critical monuments, indiscriminately shelling civilians, and by having civilians “butchered” by females and brainwashed children suicide bombers.

“To turn the gains of the military victory into stability, security, justice and development, the Government will have to do everything possible to give the people back their lives in security and dignity,” said Mr. Kubiš, who also heads the UN Assistance Mission for Iraq (UNAMI).

De-mining, stabilization and reconstruction efforts to allow the return of displaced people, as well as the elimination of ISIL cells and militias, are among the priorities.

He noted that the Governments of Saudi Arabia, Iran and Kuwait had confirmed their willingness to assist the Government of Prime Minister Haider Al-Abadi, and urged all of Iraq’s partners to “stay on course.”

In addition, the Iraqi Government has to work for national settlement and societal reconciliation within the country, as well as to enter into negotiations with the Kurdistan Regional Government, the UN envoy said.

ISIL would ultimately be defeated only “through inclusive solutions, addressing the grievances, needs and aspirations of the Iraqi people,” noted Mr. Kubiš.

He reiterated the UN’s commitment to facilitating the national settlement process and supporting grassroots reconciliation efforts. Also, with ISIL pushed out of Mosul and the people held by the group freed, the UN is “repositioning” its response to supporting survivors of sexual violence and helping to integrate them back into their communities. The UN is also working to ensure that children arrested for terrorism-related charges are transferred to juvenile institutions.

‘Fighting may be over, humanitarian crisis is not’

Some 700,000 civilians have been displaced from Western Mosul, according to UN figures.

Speaking via videolink from Baghdad, UN Development Programme (UNDP) Resident Representative for Iraq Lise Grande told journalists in New York that the top priority right now is to reach civilians who might still be in Mosul’s old city.

“We believe perhaps hundreds of people are still there,” said Ms. Grande, who is also the UN’s Humanitarian Coordinator in Iraq. She noted that in the last week of fighting some 12,000 people were evacuated. The majority of them are children and the elderly, who without sufficient water or food were too weak to even walk on their own.

Triage stabilization units established right on the front lines by the UN World Health Organization (WHO) received up to 100 patients per hour, spending about 4 minutes to stabilize each patient, before passing him or her on to a field hospital.

“The fighting may be stopping but the humanitarian crisis has not,” noted Ms. Grande.

Of the 54 residential districts in western Mosul, 15 are heavily damaged, “basically flattened,” Ms. Grande said, 23 are moderately damaged and 16 neighbourhoods have light damage.

The UN estimates the costs to stabilizing these areas and making them liveable to be more than $700 million, of which $237 million would be for the moderately and lightly damaged areas and $470 million for the more destroyed neighbourhoods.

“That is double the estimate for stabilization,” Ms. Grande said, due to fighting which was “so fierce and so much worse that what anyone else experienced.”

The UN has requested nearly $1 billion in assistance to aid the people in Mosul, with a focus on re-establishing crucial services so that people can safely return home to western Mosul.

Meanwhile, in eastern Mosul, which has been liberated since January, “schools are open, businesses are thriving, the city is recovering,” said Ms. Grande.

Since the beginning of the fighting last year, about 940,000 civilians fled Mosul. Nearly all have been housed and are receiving direct assistance, an outcome that Ms. Grande called “very positive.”

The UN official attributed the ability of aid workers to stay “one step ahead” due to the UN’s early contingency planning under the Government’s leadership and a flash appeal that was 100 per cent funded; Iraqi forces’ commitment to protecting civilians during the battles; and strong civilian-military liaison communication.

She noted that an additional 100,000 civilians are expected to flee their homes by the end of this year, as Iraqi forces start to reclaim new areas in other parts of Ninewa and Anbar Governorates and in Kirkuk Governorate, where ISIL still holds territory. 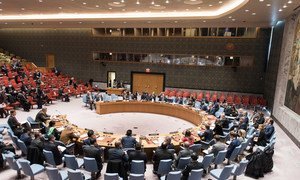 The Security Council today extended the mandate of the United Nations political mission in Iraq until 31 July 2018, also calling upon that country's Government to continue providing security and logistical support to the Organization's presence on the ground.