“Our partnership has never been more important. Across the globe, armed conflict scars countless civilians and destabilizes entire regions,” Secretary-General António Guterres told participants at the Chiefs of Defence Conference, via a video message.

Expressing gratitude to the men and women serving in peacekeeping, Mr. Guterres noted that UN “blue helmets” brave danger so others can enjoy safety.

He also welcomed the Conference’s focus on gender, with a view to increasing the number of female peacekeepers, and integrating a gender perspective into UN peace and security actions.

“When we have greater gender balance in our forces, we boost our protection outreach – and we reduce the chances of sexual exploitation and abuse,” he highlighted, urging all troop-contributing countries to deploy more women as well as to help integrate a gender-sensitive perspective in strengthening peace.

[With] greater gender balance in our forces, we boost our protection outreach – and we reduce the chances of sexual exploitation and abuseSecretary-General Guterres

In the same vein, Jane Holl Lute, the Special Coordinator on improving UN response to sexual exploitation and abuse, also underscored the need to stand together against the individual misconduct of some troops, which she said “seriously injures the vulnerable and undermines the mission and name of the United Nations.”

“Only through the continued personal leadership of the chiefs of defence forces, and others, will we effectively prevent and respond to sexual exploitation and abuse,” she said, adding: “We are in this endeavour together, and together, we can root out this scourge.”

Trust of those served must not be broken

In his opening remarks, Jean-Pierre Lacroix, Under-Secretary-General for Peacekeeping Operations, highlighted that recent developments – whether geostrategic shifts, emergence of new threats or large budget cuts – call for greater urgency to strengthen the performance of peace operations.

Success of our missions depends upon the confidence and trust placed on us by the populations we serveJean-Pierre Lacroix, UN peacekeeping chief

“Now, more than ever before, peacekeepers need to be up to the challenge of the mandates they are given,” he said, calling for continued support for peacekeeping operations.

Stressing the need to eliminate sexual exploitation and abuse, he called for putting in place measures to ensure that only troops with impeccable backgrounds are deployed, and that rigorous and consistent measures are employed to make certain that those responsible are held accountable for their acts.

VIDEO:The 2017 Chiefs of Defence Conference will take place between 6 - 8 July. The UN peacekeeping chief, Jean-Pierre Lacroix, talks about the importance of the meeting amid new challenges facing peacekeeping.

“The success of our missions depends upon the confidence and trust placed on us by the populations we serve. When this trust is broken, our credibility is indelibly damaged,” he underscored.

More needs to be done to overcome the scale of challenges

Atul Khare, Under-Secretary-General of the Department of Field Support – which provides administrative, finance, logistical and technical support to peacekeeping and political missions around the world – spoke of efforts underway to improve service delivery and to produce better value for money.

In particular, he noted a new environmental strategy to guide UN efforts to deliver support in a responsible manner as well as steps to improve medical support to peacekeepers to prevent the avoidable loss of lives.

“But we need to do more together,” he added. “We simply cannot accept that 30 of the 287 military medical facilities in peacekeeping missions either have not deployed or are deployed with sub-standard equipment.”

In particular, Mr. Khare highlighted the need for more female participation in peacekeeping, urging the chiefs of defence to redouble their efforts to contribute female personnel to serve in missions.

We simply cannot accept that 30 of the 287 military medical facilities in peacekeeping missions either have not deployed or are deployed with sub-standard equipmentAtul Khare, Head of Field Support

He also called on them to ensure that uniformed contingents deploy rapidly and with the equipment and training required to carry out the tasks that they have been mandated.

Held under the theme Meeting the Challenges, the conference also included the participation of military representatives from the African Union, the European Union and the North Atlantic Treaty Organization (NATO), as well as the Force Commanders of the UN peacekeeping missions in Mali (MINUSMA), Central African Republic (MINUSCA), South Sudan (UNMISS) and the Democratic Republic of the Congo (MONUSCO). 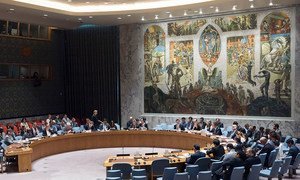 Recognizing the efforts of the United Nations Operation in Côte d’Ivoire (UNOCI) in promoting peace, stability and development, the UN Security Council today marked the closing of the mission by underscoring the importance of action by the Government to address the remaining challenges in the country for the benefit of all Ivorians.