UN Photo/Kim Haughton
Secretary-General António Guterres presents to the Economic and Social Council (ECOSOC) his report, “Repositioning the UN development system to deliver on the 2030 Agenda – Ensuring a Better Future for All”.

5 July 2017
Stating that the 2030 Agenda for Sustainable Development is the “boldest agenda for humanity” and requires equally bold changes in the United Nations development system, Secretary-General António Guterres today outlined steps to better place the Organization to deliver tangible results in the lives of the people it serves.

“We need to change in order to secure the promise of sustainable development, human rights and peace for our grandchildren and we have no time to lose,” Mr. Guterres told the Economic and Social Council (ECOSOC).

“The UN development system, therefore, must itself be far more integrated [and aligned] in our response […] to work seamlessly across sectors and specializations – and to do so more effectively.”

Mr. Guterres noted that his report to the Council (on repositioning the UN development system) is an integral component of the broader reform agenda at the UN to better meet the world’s complex and interlinked challenges.

He added that his ideas and proposals are intended to spur further discussions in the Council and to solicit the views of Member States on a number of key areas. A more detailed report will be submitted in December.

Mr. Guterres highlighted eight key guiding areas for his proposed reforms. The first is accelerating the transition of the UN development system from the Millennium Development Goals (MDGs) to the 2030 Agenda and, at the same time, closing gaps and improving skillsets.

“We must be able to provide advice, pool expertise and help governments implement the Sustainable Development Goals (SDGs) and help convene the partners they require to take actions to scale,” he said.

He also highlighted the need for a stronger focus on financing for development to help governments better leverage financing as well as working with a broad range of actors including the private sector, international financial institutions and other partners.

Another area of focus is enhancing the effectiveness of UN Country Teams – which comprise all UN agencies operating in a particular country – to build on the strengths of individual agencies while delivering with greater coherence, unity and accountability.

He also underlined the need to “delink” the functions of UN Resident Coordinators from UNDP Resident Representatives to enable more effective and integrated analysis and planning at the country level to encompass the dimensions of sustainable development.

Further, he noted that reform efforts would be taking place at the headquarters levels as well to ensure that no new bureaucracies or superstructures are created.

To that end, he announced that Deputy Secretary-General Amina Mohammed has been tasked to oversee and provide strategic guidance to the UN Development Group and lead a Steering Committee to strengthen coherence between humanitarian action and development work.

Other areas of focus included strengthening a more cohesive UN policy voice at the regional level; strengthening accountability of the UN development system; and ensuring effective and efficient funding structures that would offer greater value-for-money and reporting on system-wide results.

Success will be seen through results on the ground

Noting that the success of the reforms would be seen in tangible results in the lives of the people served by the Organization, the Secretary-General said that many of the issues raised in the report would require further consideration and that he looked forward to working with the Member States on that matter.

“Repositioning the UN development system is our shared responsibility […] I am convinced that, together, we can take the bold steps that the new agenda requires and that humanity deserves,” he stated. 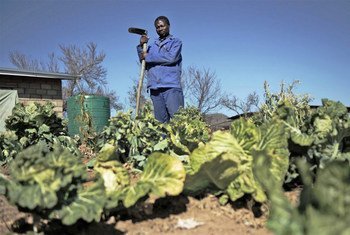 22 May 2017
Promises made for financing the implementation of sustainable development goals must be promises kept, speakers said today at the opening of a United Nations forum.