African governments should make it easier and safer for Africans to travel within the continent, the United Nations said in a new report released today, noting that tourism demand there is increasingly driven by Africans themselves.

“Tourism is a dynamic sector with phenomenal potential in Africa. Properly managed it can contribute immensely to diversification and inclusion for vulnerable communities,” said Mukhisa Kituyi, Secretary-General of the UN Conference on Trade and Development (UNCTAD).

The agency’s “Economic Development in Africa Report 2017 focuses on tourism for transformative and inclusive growth.

Chantal Line Carpentier, Chief of UNCTAD’s New York office, said tourism export revenues tripled since 1998, from $14 billion to nearly $47 billion. Tourism now contributes to about 8.5 per cent of the continent’s gross domestic product (GDP), compared with 6.8 per cent in 1998.

“African tourism is increasingly driven by Africans themselves due to a growing middle-income class,” Ms. Carpentier told a press conference at UN Headquarters, adding that four out of 10 international tourists in Africa are from the continent itself.

“By 2026, tourism’s direct contribution to GDP is forecast to surpass $121 billion,” she noted.

Highlighting some of the findings from the report, Ms. Carpentier said to realize the continent’s economic growth, governments should take steps to liberalise air transport, promote the free movement of persons, ensure currency convertibility and, crucially, recognise the value of African tourism and plan for it.

She noted the importance of easing red tape in travel between countries, such as limiting the number of visas needed when traveling on the continent, using the European Union’s one visa as an example.

The UN official also noted the importance of keeping money in the continent – such as by sourcing food from local farmers, many of whom are living in poverty, instead of importing from overseas.

“This will require capacity building for producers to meet international standards and produce in time to meet demands,” Ms. Carpentier noted.

She added that the growing tourism sector offers opportunities for young people, who globally make up about half of the tourism labour force.

The sector is also heavily women-driven, with nearly one-third of jobs taken up by women, and nearly half in the hotel and restaurant sector.

Tourism and perceptions of peace

Another important theme highlighted in the report is the mutually beneficial relationship between peace – or its perceptions – and tourism.

It notes that the economic impacts of political stability can be quite significant and long-lasting. For example, following political instability in Tunisia, total tourism receipts in 2009–2011 declined by 27 per cent on average, from $3.5 billion in 2009 to $2.5 billion in 2011.

“Addressing safety and security concerns as well as swift responses to crises by African governments and regional institutions are paramount to the growth of tourism in Africa,” UNCTAD said.

“Promoting strategies aimed at improving Africa’s image in the global media are also critical in ensuring the sector’s recovery after conflict or political unrest.”

The mere appearance of instability in a region can deter tourists, leading to devastating, long-lasting economic consequences. However, the perception of danger does not always correspond with reality, according to the UN agency.

The 2014 Ebola outbreak in western Africa, despite being isolated to relatively few countries in that region, resulted in a loss across the entire continent. 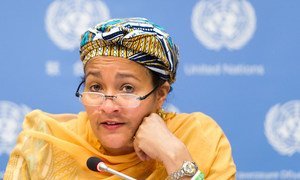 Deputy Secretary-General Amina Mohammed today called for strengthening the relationship between the African Union (AU) and the United Nations to deliver on promised development for Africa's youth.