Funded by Germany, a project supported by the Food and Agriculture Organization (FAO) will train Syrian refugees in the Erbil and Dohuk governorates in greenhouse vegetable cultivation, and assist Iraqi families with hens to produce eggs and meat along with training and tools for bee-keeping and food processing.

“Families are struggling, some resorting to reducing their meal sizes or the number of meals each day, selling productive assets, or buying food on credit,” said Fadel El-Zubi, FAO Representative in Iraq. “Through restoring and providing alternative livelihoods, this project will support Government efforts to reduce long-term dependence on emergency food assistance and enable people to recover as quickly as possible.”

Years of conflict in Iraq has left 3.2 million people food insecure, including those who depend on agriculture for their livelihoods. As more than three million remain displaced, stretched resources of host communities are increasingly under pressure.

Another 240,000 Syrian refugees are living in Iraq, 97 per cent of whom are staying in communities or camps in northern Iraq.

During the first week of June, 2,400 people from 150 villages – either displaced by conflict or residents of areas where displaced people or refugees were living – received 9,600 hens, poultry feeding and drinking equipment, and 80 tons of feed.

Over the course of a year, the hens will produce approximately 1.38 million eggs and 1,200 kilograms of meat. Each family received 23 hens, which will yield some 3,450 eggs and 30 kilograms of meat – enough to provide both food and income.

Another 2,400 people will receive training, tools and equipment for bee-keeping for honey production, and dairy and fruit processing, to produce a variety of dairy products, fruit jams and dried fruit for sale.

Some 3,000 Syrian refugees in Qushtapa camp in Erbil governorate and Domiz 1 camp in Dohuk governorate will receive training in greenhouse vegetable production. Due to high market demand, 10 greenhouses at each camp will initially focus on growing tomatoes and cucumbers. Income from vegetable sales will then enable families to buy extra food and other necessities. Camp residents and those from surrounding communities will be able to purchase greenhouse produce during two vegetable seasons each year. 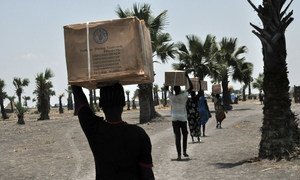 Protracted fighting and unrest are swelling the ranks of displaced and hungry ins some parts of the world, even as large agricultural harvests in some regions are buoying global food supply conditions, according to a new report by the United Nations agriculture agency.