“Report Card 14 is a wake-up-call that even in high-income countries progress does not benefit all children,” said Sarah Cook, Director of UNICEF Innocenti.

Building the Future: Children and the Sustainable Development Goals in Rich Countriesis the first report to assess the status of children in 41 high-income countries in relation to the Sustainable Development Goals (SDGs) identified as most important for child well-being. It ranks countries based on their performance and details the challenges and opportunities that advanced economies face in achieving global commitments to children.

“Higher incomes do not automatically lead to improved outcomes for all children, and may indeed deepen inequalities. Governments in all countries need to take action to ensure the gaps are reduced and progress is made to reach the SDGs for children,” she emphasized.

While the report says that on average one in five children in high-income countries lives in relative income poverty, there is wide variation, from one in 10 in Denmark, Iceland and Norway to one in three in Israel and Romania.

On hunger, an average of one in eight children in high-income countries faces food insecurity, rising to one in five in the United Kingdom and the United States, and to one in three in Mexico and Turkey.

Turning to healthy lives, neonatal mortality has dramatically fallen in most countries; and rates of adolescent suicide, teenage births and drunkenness are declining. However, one in four adolescents reports two or more mental health issues more than once a week.

Regarding quality education, even in the best-performing countries, including Japan and Finland, around one-fifth of 15-year-olds do not reach minimum proficiency levels in reading, mathematics and science. 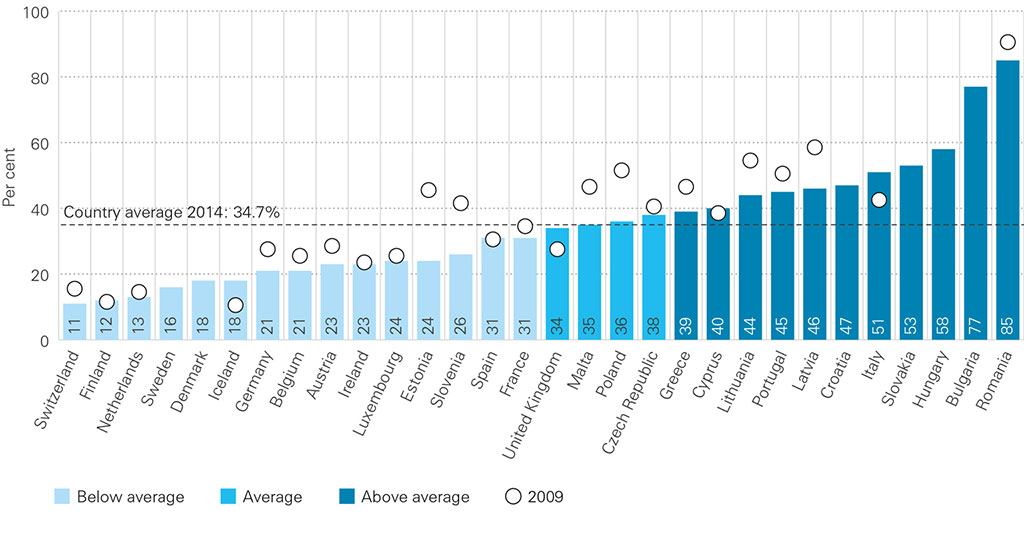 Moreover, the Report Card reveals that an average of 14 per cent of adults surveyed in 17 rich countries believe that boys deserve preference for university education, and in the majority of these countries the belief is higher among males.

In ranking 41 countries, the league table reads well for those countries that frequently appear at the top of recent comparisons of human and child development – the Nordic countries, Germany and Switzerland – and less well for lower-income countries in the group, such as Romania, Bulgaria and Chile. However, a closer look reveals room for improvement across the board as all countries rank in the mid- or bottom-third on two or more goals.

Based on Report Card results, UNICEF is calling for high-income countries to take action by putting children at the heart of equitable and sustainable progress, saying that: “Improving the well-being of all children today is essential for achieving both equity and sustainability.”

UNICEF is also appealing for improved collection of comparable data; tailored policy responses to national contexts; honouring global sustainable development commitments; and that no child be left behind.

At least 2.7 million children live in residential care worldwide and face increased risk of violence, abuse and long-term damage to their cognitive, social and emotional development, a United Nations study says, warning that “this is just tip of the iceberg.”