Not only strong, but smart policies needed to combat terrorism – UN chief

Efforts and policies to prevent extremism must encompass all segments of the society, in particular those who have suffered structural discrimination and marginalization, United Nations Secretary-General António Guterres said today, warning that measures which fail to do so could end up effectively “driving” people into the hands of terrorists.

“Policies that limit human rights only end up alienating religious and ethnic communities, who would normally have every interest in fighting extremism,” Mr. Guterres highlighted at a high-level meeting – he chaired – on counter-terrorism strategies in Central Asia.

“Acknowledging and respecting people's dignity and rights – including their frustrations and critical opinions – helps to combat extremism, by building social cohesion and a sense of the common good,” he added.

The threat from terrorism and violent extremism has gotten worse with terrorist organizations becoming increasingly transnational, enabling and inspiring attacks and radicalizing individuals, particularly youth, outside of conflict zones.

And in this context, he applauded the efforts of Kazakhstan, Kyrgyzstan, Tajikistan, Turkmenistan and Uzbekistan, which in 2011, had adopted the Ashgabat Declaration and the Joint Plan of Action for the Implementation of the United Nations Global Counter-Terrorism Strategy in Central Asia – the first regional initiative of its kind.

“It reflected [the] countries' commitment to jointly addressing and defeating the scourge of terrorism, with the support of the UN,” said Mr. Guterres, noting that the plan of action has become an example for others around the world, and stands out as an impressive display of collective action, leadership and political will.

The UN chief further called on the countries to continue to work together on issues such as countering the financing of terrorism, enhancing border security, nurturing dialogue with religious institutions and leaders, as well as highlighting the role of the media in addressing terrorism and violent extremism.

“Central Asia has the opportunity to show global leadership by developing national and possibly a regional plan of action to prevent violent extremism […] the UN continues to stand ready to assist in these efforts,” he said.

Also today at the meeting held in the Turkmen capital, Ashgabat, ministers from the five Central Asian countries adopted a joint declaration on strengthening regional collaboration to counter-terrorism.

They also resolved to implement the UN Global Counter-Terrorism Strategy (adopted by the General Assembly, by consensus, in 2006) as well as the recommendations of the Secretary-General's Plan of Action to Prevent Violent Extremism by promoting dialogue and conflict prevention, addressing the foreign terrorist fighters phenomenon, promoting skills development and employment facilitation, countering terrorist narratives and the misuse of information technologies. 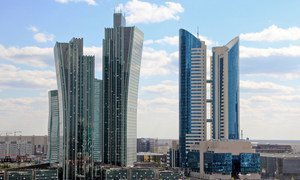 Secretary-General António Guterres today stressed the importance of partnership between the United Nations and the Shanghai Cooperation Organization (SCO) in achieving global development goals and combating some of today's key threats to peace and security, such as terrorism.