Even though digital multinational enterprises – Internet and e-commerce platforms such as Uber, Instagram and Facebook – saw “dramatic” growth over the past few years, more than 60 of the top 100 such ventures were concentrated in three countries, leaving much room for growth elsewhere, a new, ground-breaking United Nations report revealed today.

Even though digital multinational enterprises – Internet and e-commerce platforms such as Uber, Instagram and Facebook – witnessed “dramatic” growth over the past few years, more than 60 of the top 100 such ventures were concentrated in three countries (the United States, the United Kingdom and Germany), leaving much room to grow elsewhere, a new, ground-breaking United Nations report has revealed.

According to the World Investment Report 2017: Investment and the Digital Economy, released today by the UN Conference on Trade and Development (UNCTAD), only four companies in the top 100 were based developing nations.

“The digital economy has important implications for investment, and investment is crucial for digital development,” Mukhisa Kituyi, the Secretary-General of UNCTAD, said in a news release announcing the findings.

“[However] developing countries cannot be left behind. We need to create enabling policies that close the digital divide in global investment.”

The divide also held true for affiliates of those top 100 ventures as only 13 per cent were based in developing and transition economies, compared to about 30 per cent overall.

In terms of business and operations, digital multinational enterprises recorded about 70 per cent of their sales abroad but only 40 per cent of their assets were based outside their home countries, resulting in fewer jobs created directly in host countries.

However, such investments can increase competition and spur digital development, argued UNCTAD, emphasizing the need for regulations and policies for the promotion of investment that consider the new cross-border operating models of multinationals as well as those that strengthen digital development strategies.

Digital development in all countries, and particularly the participation of developing countries in the global digital economy, calls for targeted investment policies to build connectivity infrastructure, promote digital firms and support digitalization of the broader economy.

“This means creating and maintaining a conducive regulatory framework for digital firms, as well as active support measures, which may include establishing technology or innovation hubs, building or improving e-government services, and supporting venture capital funding and other innovative financing approaches,” it noted.

The World Investment Report also pointed out that global foreign direct investment (FDI) flows could rise by about 5 per cent, reaching almost $1.8 trillion in 2017 and this modest increase is expected to continue into 2018, taking flows to $1.85 trillion, and projections indicate that the US, China and India could be the top prospective destinations for FDI.

The Report also showed that the prospects remained moderately positive for most other regions – except Latin America and the Caribbean – with developing countries as a group expected to gain about 10 per cent.

“The road to a full recovery for FDI remains bumpy, but we are cautiously optimistic,” said Mr. Kituyi, expressing some concern that other factors such as the elevation of geopolitical risks and policy uncertainty may impact the scale of the upturn.

AUDIO: Mukhisa Kituyi, chief of the UN Conference on Trade and Development (UNCTAD) told UN News the decline in foreign investment, especially in developing countries, was particularly worrying given the huge investment needed to reach the 2030 Sustainable Development Goals.

♦ Receive daily updates directly in your inbox - Subscribe here to a topic.
♦ Download the UN News app for your iOS or Android devices.
digital

UN telecommunications group aims to hook up the unconnected by 2015 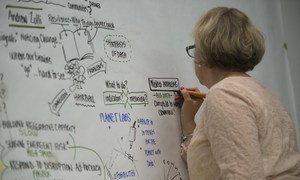 Big data can have a 'big impact' on achievement of Global Goals, UN says on IT Day

Mastering and measuring 'big data' – to map poverty from space or use mobile phones to track food security – could boost evidence-based decision-making at local and global levels and drive the implementation of all 17 Sustainable Development Goals (SDGs), the United Nations telecommunications agency said today.