As heavy fighting continues to drive large numbers of people from Mosul, the United Nations refugee agency today appealed for urgent support to meet the critical needs of vulnerable children, women and men displaced from and returning to the city.

According to Iraqi authorities, more than 750,000 have been forced to flee since military operations to retake the city from Islamic State of Iraq and the Levant (ISIL/Da'esh) fighters.

“A shortage of funds threatens to undermine our humanitarian response at this critical time,” Andrej Mahecic a spokesperson for the Office of the UN High Commissioner for Refugees told the press at a regular media briefing in Geneva.

The UN agency is in need of about $126 million to sustain its operations. Nearly half of this amount – $60 million – is needed for the more than 100,000 newly displaced families to provide them emergency shelter in the camps, legal assistance to replace lost and missing documents, child protection, prevent sexual and gender based violence, as well as for blankets, mattresses and other core relief items.

A further $24 million is needed to assist and support Iraqi families returning to their homes.

Estimates indicate that 125,000 internally displaced people have returned to their homes, many in east Mosul and on the outskirts of the city but most are living in damaged buildings and need shelter assistance as well as financial support. Their situation also needs monitoring for protection concerns.

So far, the UN agency has also established 12 camps in support of the overall efforts by the Iraqi authorities to provide shelter to currently 316,000 internally displaced Iraqis in relative proximity to Mosul.

Overall UNHCR's protection and assistance programmes in Iraq amount to $578 million in 2017. However, these are currently 21 per cent funded – a major cause for concern given that the year is already into its sixth month. 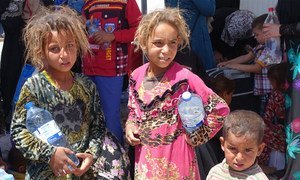