MINUSCA
Assistant Secretary-General for Human Rights Andrew Gilmour during the presentation of the mapping report on human rights violations in the Central African Republic between 2003 and 2015.
31 May 2017

Despite “vast improvement” in security in parts of the Central African Republic (CAR), there are still deep tensions and some fear of a sudden relapse, a top United Nations human rights official said while visiting the strife-torn country.

Assistant Secretary-General for Human Rights Andrew Gilmour said he was struck by the improvements in the capital, Bangui, such as “bustling markets and signs of growing economic life” and a “police, justice and corrections institutions beginning to take form.”

In Bambari, within the Ouaka prefecture, where clashes between armed groups killed numbers of civilians and displaced a significant population, Mr. Gilmour saw a fledging gendarmerie, police, judiciary and civil authorities.

Calling it a “town without armed groups,” Mr. Gilmour said Bambari “represents a model of hope of the possible way forward,” due to the collaboration between Government forces, UN peacekeepers from the UN Integrated Stabilization Mission, known as MINUSCA, international partners and non-governmental organizations.

The senior UN official warned, however, that armed groups are coalescing and continuing with “atrocious attacks” against women and children, even as disarmament has stalled, attacks on peacekeepers continue, and deployed forces battle without sufficient resources.

“This is a time for leadership, strengthened partnerships, and a coordinated approach that puts Central Africans’ ‘Human Rights Up Front’,” Mr. Gilmour said referring to the UN initiative to prevent and respond early to large-scale human rights or humanitarian violations.

“Warning signs are flashing and must not be ignored,” stressed Mr. Gilmour.

Fresh violence surfaced earlier this year. As of May 2017, there were more than 500,000 internally displaced persons nationwide, a figure that had not been reached since August 2014. 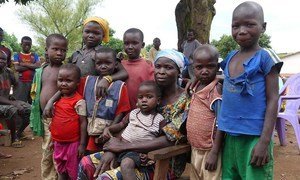 United Nations agencies are seeking to rally support for the people fleeing escalating violence in the Central African Republic (CAR), while the Organization's human rights office has called for the establishment of a strong justice system in the country.