On May 19th, 2017, a child suufering from malnutrition is awaiting treatment in a health center in the province of Kasai Orientale in the Democratic Republic of the Congo, a region plagued by conflict between the militia of the traditional leader Kamuina Nsapu and the Government Armed Forces. © UNICEF/UN064921
24 May 2017

Deteriorating security conditions have severely disrupted life-saving interventions for children in Greater Kasai in the Democratic Republic of the Congo (DRC) in recent months, putting an estimated 400,000 children at risk of severe acute malnutrition, the United Nations Children's Fund (UNICEF) has said.

“These children are among the most vulnerable in the country, and now they face a looming crisis if access to basic services is not restored quickly,” said Marie-Pierre Poirier, UNICEF's Regional Director for West and Central Africa, in a press release.

“Without adequate health care, without access to food and clean water, the lives of hundreds of thousands of children are at risk,” she added.

Across the five provinces of Greater Kasai, critical health infrastructures are no longer operational due to the conflict. In Central Kasai Province alone, more than one-third of health centers have been forced to close following looting, due to security concerns for staff or lack of medical supplies, depriving children of vital services and medicine.

Supplies of food and basic necessities are dwindling, and displacement has forced families to live in conditions with inadequate hygiene or sanitation.

“Our priority over the next few weeks is to reach thousands of severely malnourished children that can no longer be cared for in the health centers that have been destroyed,” said Tajudeen Oyewale, acting UNICEF Representative in the Democratic Republic of Congo. “But insecurity in these remote areas is making our work very challenging.”

Even before the latest wave of violence, the Kasai Provinces were among the poorest in the country. More than one in ten children die before the age of five due to lack of adequate health care. Half the children suffer from chronic malnutrition or stunting.

UNICEF needs $40.2 million for its emergency response in Greater Kasai. 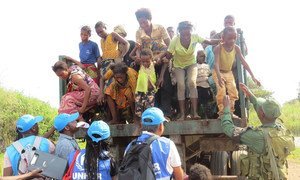 With violence and insecurity continuing to force people to flee Democratic Republic of Congo’s Kasai region and seek refuge in neighbouring Angola, the United Nations refugee agency has called for a suitable place to shelter them as well as additional resources to support those in urgent need.