“Today, I am deeply concerned by the excessive trivialization of insults, sexist and homophobic remarks in the media, in everyday life, on social networks, even from political leaders,” said UN Educational, Scientific and Cultural Organization (UNESCO) Director-General Irina Bokova in her message for the International Day against Homophobia, Transphobia and Biphobia (IDAHOT), commemorated annually on 17 May.

She recalled the situation of homosexuals under the Nazi regime, interned in "re-education" camps, and killed. The UN was created to prevent such crimes from happening again, she stressed, noting that UNESCO is committed to protecting the rights of homosexual and transgender people by drawing across its mandate to advance education, the sciences, culture, communication and information.

“These are powerful tools to fight the prejudice, verbal violence and stigmatization that foreshadow physical violence and that violate the equality and inherent dignity of all. This work for reason and tolerance begins on the benches of school,” she said.

Research by the International Labour Organization (ILO) has found that workplace policies, often designed from a hetero-normative perspective, may fall short of addressing the issues and concerns of LGBTI workers. For example, LGBTI workers may be excluded from leave and benefit entitlements, such as parental leave, because their families do not fit traditional norms.

“In keeping with the principles of the 2030 Agenda for Sustainable Development, no LGBTI worker should be left behind. Today let us stand in solidarity for the rights of LGBTI workers and their families,” said ILO Director-General Guy Ryder.

Gender identity and sexual orientation can have an impact on a migrant's journey, unfortunately often in a negative and even dangerous way, warns the International Organization for Migration (IOM).

“IOM has a zero tolerance policy for any type of homophobia, transphobia or biphobia and does not tolerate any abuses against migrants and host communities receiving assistance or protection from IOM,” said Director General William Lacy Swing.

“We urge States worldwide to adopt a legal and policy framework, with comprehensive implementation measures, to protect the rights of trans and gender diverse youth, respectful of gender diversity, and to enable the realization of their fullest potential,” they said in a news release from the Office of the UN High Commissioner for Human Rights (OHCHR).

The Joint United Nations Programme on HIV/AIDS (UNAIDS) said that its vision of zero discrimination and ending AIDS by 2030 will only become a reality if the response to HIV reaches everyone, including LGBTI people.

“Many young gay and transgender people are rejected by their families, living on the streets, facing all types of discrimination and violence,” said UNAIDS Executive Director Michel Sidibé. “This is not the path to healthy and productive societies. We must encourage inclusion and compassion and ensure that networks of support are in place, including access to essential health and social services.”

The Day's theme this year is 'Love Makes a Family.' 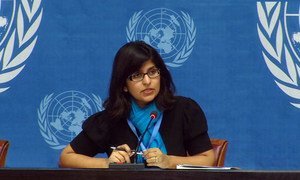