UNICEF/Kate Holt
A woman stands in a shelter for girls and women who have endured sexual and gender-based violence, in Mogadishu, the capital of Somalia.
15 May 2017

Although global understanding of sexual violence in conflict is shifting, there remains the need to tackle the root causes of such violations that lie in fundamental inequality and discrimination against women, Deputy Secretary-General Amina Mohammed told the United Nations Security Council today.

“Sexual violence in conflict is no longer seen as ‘merely a women’s issue’ or as a ‘lesser evil’ in a false hierarchy of human rights violations,” she said during an open debate on the subject, in which some 70 speakers shared their views.

The debate, on sexual violence in conflict as a tactic of war and terrorism, heard briefings from Adama Dieng, Under-Secretary-General, Acting Special Representative of the Secretary-General on Sexual Violence in Conflict and Special Adviser on the Prevention of Genocide, as well as Mina Jaf, Founder and Executive Director of Women's Refugee Route.

“Instead, it is rightly viewed as legitimate threat to security and durable peace that requires an operational security and justice response, in addition to ensuring multi-dimensional services for survivors of such crimes,” Ms. Mohammed added.

She said that a robust legislative framework is now in place, including a series of precise Security Council resolutions with new tools to drive change and progress.

As for accountability at the international and national level, “there is a gradual shift from a reality in which it is cost-free to rape a woman, child or man in conflict, to one where there are consequences for anyone who commits, commands or condones such crimes,” the deputy UN chief said. 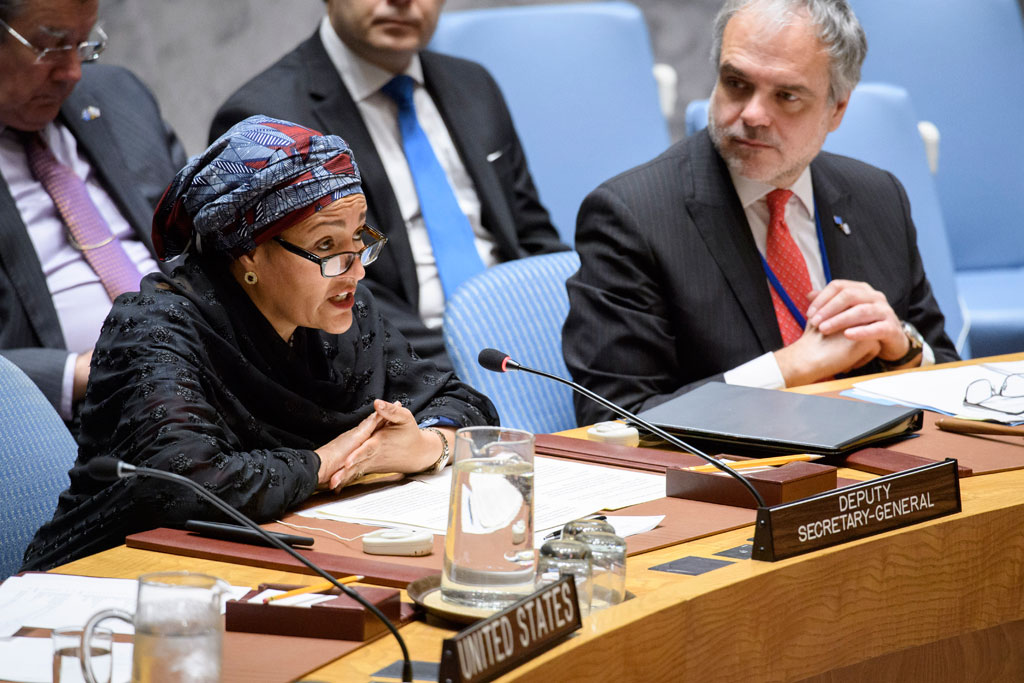 Deputy Secretary-General Amina Mohammed addresses the Security Council on the topic, “Women and peace and security: sexual violence in conflict.” At her side is José Luis Cancela, Vice-Minister for Foreign Affairs of Uruguay and and President of the Security Council for May. UN Photo/Manuel Elias

However, too many women live with the spectre of violence in their daily lives, in their household and families, she noted.

In word and deed, let us commit to stand in solidarity with survivors and vulnerable communities, and replace horror with hope

Sexual violence is increasingly used as a tactic of terrorism, employed by extremist groups in places like Iraq, Syria, Yemen, Somalia, Nigeria and Mali to advance their military, economic and ideological ends.

It is therefore essential that considerations of the protection and empowerment of women and girls feature in the UN’s architecture for countering terrorism and violent extremism, she stressed.

The mass migration crisis and massive displacement of populations due to protracted conflicts worldwide has also heightened the risk of sexual violence.

“Let us also acknowledge that the response of the United Nations is undermined by unacceptable allegations and incidents of sexual abuse and exploitation by peacekeepers,” she said, highlighting the Organization’s focus on its zero-tolerance policy.

She pointed out that those who commit these heinous crimes often escape justice while their victims are often forced to live with the shame of having been raped, rejected by their families and communities.

“All our words, and laws, and resolutions, will mean absolutely nothing if violations go unpunished in practice, and if we fail in our sacred duty of care to survivors,” she said, adding: “In word and deed, let us commit to stand in solidarity with survivors and vulnerable communities, and replace horror with hope.”

“This is a litmus test of our commitment and responsibility to protect the most vulnerable populations from the most egregious human rights violations,” Ms. Mohammed told the meeting.

Drawing attention to the harrowing traumas of child victims of sexual violence, a Goodwill Ambassador for the United Nations Children’s Fund (UNICEF) has called for greater recognition of the fact that it is “not OK” for children to be touched inappropriately as well as for raising awareness among youngsters that under-age sex can lead to pregnancy or sexually transmitted diseases.