United Nations Secretary-General António Guterres today urged Pyongyang to return to the path of denuclearization saying the latest ballistic missile launch by the Democratic People’s Republic of Korea (DPRK) is a threat to peace and security in the region.

“The Secretary-General condemns the launch of another ballistic missile by the DPRK, the Spokesman said in a statement.

He added that that launch violates Security Council resolution, and said that Mr. Guterres calls on the DPRK to “ensure full compliance with its international obligations.”

DPRK fired the missile while the UN chief was in Beijing for the Belt and Road Forum. Addressing President Xi Jinping, Mr. Guterres highlighted the shared aims of China’s One Belt, One Road initiative and the Sustainable Development Goals (SDGs), such as deepening connectivity in infrastructure, trade and finance.

The missile was reportedly fired from a base in the north-west DPRK, near the border with China.

Later in the day, the UN Security Council also strongly condemned the ballistic missile launches. In a press statement, the Council expressed utmost concern at DPRK’s highly destabilizing behaviour and “flagrant and provocative defiance” of the body by conducting the missile launches in violation of the country’s international obligations under relevant Council resolutions.

As such, the Council members vowed to fully implement all measures imposed on the DPRK and strongly urged all other Member States to do so in an expeditious and serious manner. They also stressed that the DPRK’s illegal ballistic missile activities “are contributing to its development of nuclear weapons delivery systems and are greatly increasing tension in the region and beyond.”

Further to the statement, the Council emphasized the vital importance of the DPRK immediately showing sincere commitment to denuclearization through concrete action and stressed the importance of working to reduce tensions in the Korean Peninsula and beyond. To that end, the Council demanded the country conduct no further nuclear and ballistic missile tests. 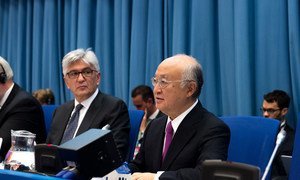 The head of the United Nations atomic agency today expressed serious concern about the nuclear program of the Democratic People’s Republic of Korea (DPRK), saying all indications suggest that the country is moving ahead with its nuclear efforts.