Ministry of Tourism and Culture, Azerbaijan
Night time view of Baku, Azerbaijan.
5 May 2017

'Hard power' can no longer stop conflicts nor the rise of violent extremism and “ancient hatreds” such as antisemitism and racial discrimination, the head of the United Nations cultural agency said today, insisting that “we need 'soft power' of education, knowledge, culture, communication, the sciences, to strengthen the values we share and recognize the destiny we hold in common.”

Irina Bokova, the Director-General of the UN Education Scientific and Cultural Organization (UNESCO) made this call at the opening ceremony of the 4th World Forum on Intercultural Dialogue hosted by the Government of Azerbaijan in the country's capital, Baku, and co-organized along with UNESCO, the UN Alliance of Civilizations.

More than 500 participants from around the world are attending the Forum under the theme 'Advancing Intercultural Dialogue – New avenues for human security, peace and sustainable development.'

Ms. Bokova praised President Ilham Aliyev of Azerbaijan for his “longstanding leadership in promoting intercultural dialogue” as well as the tireless engagement of the First Lady, Mehriban Aliyeva, as UNESCO Goodwill Ambassador for Oral and Musical Traditions.

Azerbaijan has a long history on the 'Silk Road' ancient trade route, as a centre for exchange, scholarship and art. Baku's Walled City is also inscribed on the UNESCO World Heritage List.

Conflicts across the world are tearing countries apart with civilians hardest hit, Ms. Bokova warned, pointing to the rise of violent extremism and 'cultural cleansing,' as well as what she called “ancient hatreds” like antisemitism, racial discrimination and intolerance.

“We see mosques, churches and other temples destroyed and cultural diversity threatened,” the UNESCO chief told a room full of dignitaries and representatives of the public, private and non¬–profit sector. “We see education under attack and children forced out of learning. We see freedom of expression threatened, journalists attacked. We see societies closing against perceived 'others,' and minorities persecuted.”

In this context, Ms. Bokova argued, the world has no choice but to respond while remaining true to the compass setting of human rights and dignity.

Of late, she added, hard power is not enough. The world needs the soft power of education, knowledge, culture, communication, the sciences, to strengthen the values we share and recognize the destiny we hold in common.

Picking up that thread, Nassir Abdulaziz, UN High Representative for the Alliance of Civilizations (UNAOC), in his address said military actions and security measures cannot be the only response to the world's challenges. “The interconnected nature of today's crises requires us to connect our own efforts for peace and security, sustainable development and human rights, not just in words, but in practice,” he said.

“The challenge now is to make corresponding changes to our culture, strategy, structures and operations. We must commit to achieve human security and sustainable development, in partnership with regional organizations, mobilizing the entire range of those with influence, from religious authorities to civil society and the business community, he said, adding that women and youth must also be brought to the table.

The Baku Process has become a successful platform to promote “peaceful and inclusive societies” around the world. Since its inception, Mr. Al-Nasser said, the Forum has encouraged and enabled people and communities worldwide to take concrete measures to support diversity, dialogue and mutual understanding amongst nations.

The focus of this year's Forum is particularly significant, he continued, adding that human security places people at the centre of multidisciplinary approaches and response, including development and human rights. 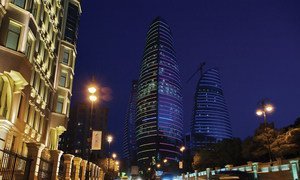 The integration of migrants in cities, countering the rise of violent extremism, as well as youth radicalization on the Internet are just some of the issues being discussed at a United Nations conference opening on Friday in Baku, Azerbaijan.