Safe drinking water is a major concern in Mosul, where a battle has been underway for the past six months to retake the city from the Islamic State of Iraq and the Levant (ISIL), the United Nations humanitarian arm has said

Some 450,000 people are currently displaced and the number continues “to increase rapidly,” the Office for the Coordination of Humanitarian Affairs (OCHA) in Iraq said.

Humanitarian partners are trucking water to eastern Mosul at a rate of 2.3 million litres every day. Nearly 28 neighbourhoods now have access to clean drinking water in the east.

However, “in newly retaken areas of western Mosul city, water trucking has already begun on a small scale, but significant increase in scale is required,” OCHA said.

The UN is also working with partners to re-establish a functioning city-wide water network.

In addition to water, emergency food and hygiene supplies are being distributed to families close to the front lines. More than 2.1 million people received urgent aid since October.

As the fighting rages, ensuring that trauma casualties receive the specialized treatment they need in a timely manner remains a high priority, UN and humanitarian partners have said.

Since mid-October, more than 8,100 people have been referred to hospitals in Mosul and surrounding areas. New field hospitals have also been created, one for emergency reproductive and obstetric healthcare.

In addition, the UN and its partners are working to house families and provide protection, particularly to women and children.

More funding is needed. The 2017 Humanitarian Response Plan for Iraq requesting $985 million is currently 17 per cent funded, according to OCHA. About $331 million of that is sought for the Mosul operation. 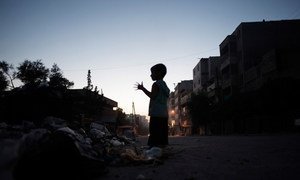