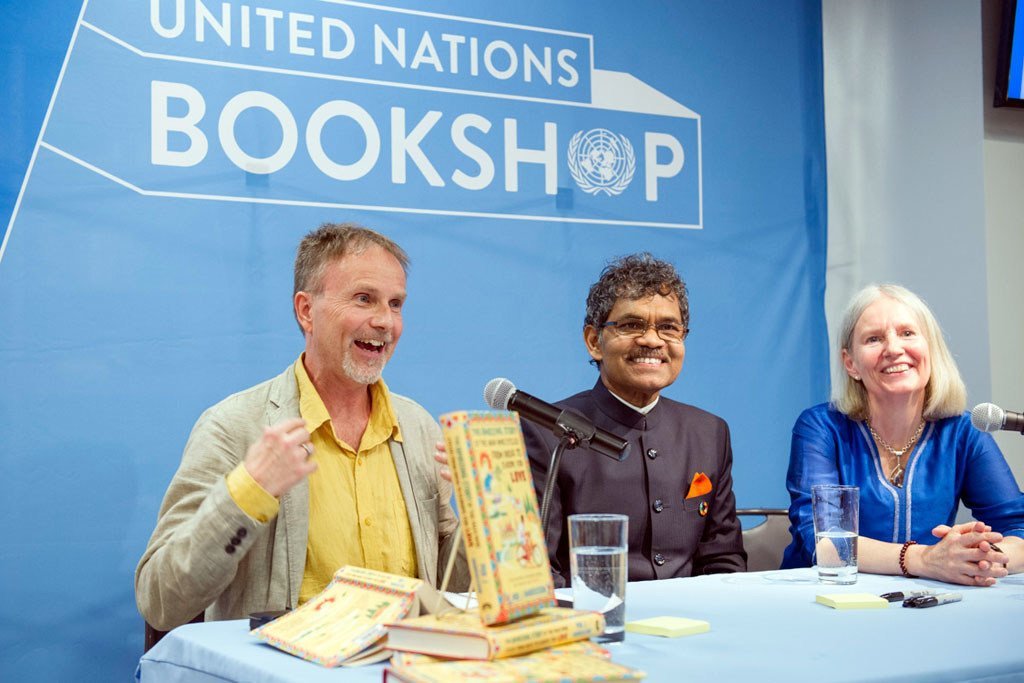 UN Photo/Rick Bajornas
Author Per J. Andersson (left), Pradyumna Kumar Mahanandia (center) and Charlotte von Schedvin at a book launch event at in celebration of International Day of Happiness at the United Nations in New York.
13 April 2017
Culture and Education

Love at first sight. An inevitable separation. A seemingly impossible journey for love mixed with a dash of art and late 1970s ‘hippie culture.’ This is the amazing true story of an Indian man who cycled across eight countries to be reunited with his sweetheart.

Pradyumna Kumar Mahanandia, known as ‘PK,’ made this incredible journey some 40 years ago. Born to a poor family in a village in eastern India, PK met Charlotte von Schedvin, a Swedish girl who had heard of him and had come to India to get her portrait drawn.

They fell in love and were married, but in 1975, Charlotte had to return to school in Sweden. PK wanted to finish his studies as well, and could not accompany her. For some time after, he tried to figure out a way to get to her until finally, in 1978, he decided to sell all his belongings and set out on an impossible overland journey.

He biked for four months, through Afghanistan, Iran, Turkey, Bulgaria, (former) Yugoslavia, Germany, Austria and Denmark to be reunited with the love of his life in Sweden.

He and Charlotte, known as ‘Lotte,’ have been together ever since.

Their story is told in the book The Amazing Story of the Man Who Cycled from India to Europe for Love by Swedish journalist and travel writer, Per J. Andersson.

All three sat down with UN News and United Nations Headquarters in New York, to record a truly heart-warming episode of our podcast series The Lid is On.

UN staff and visitors got to meet PK, Lotte and Per during a book signing held at UN Headquarters to mark the International Day of Happiness, observed annually on 20 March.

AUDIO: The Lid is On - Dianne Penn talks with Pradyumna, Charlotte and Per at UN Headquarters in New York, on a wide-ranging conversation about love, life and happiness.

The UN has celebrated the International Day since 2013 as a way to recognize the importance of happiness in the lives of people everywhere.

At the book signing, PK wore a pin promoting the 17 Sustainable Development Goals (SDGs) which seek to end poverty, reduce inequality and protect the planet.

The UN believes these are three key aspects that contribute to well-being and happiness.

“We love to share our love, but the story has its own life and energy,” PK told UN News, adding that the UN is the ideal platform as it brings the world’s people together.

Speaking at an event today marking the International Day of Happiness, the deputy United Nations chief called for more inclusive, equitable and balanced approaches to development that promote sustainability, poverty eradication, happiness and well-being of all peoples.