Millions across Africa, Yemen could be at risk of death from starvation – UN agency

Warning of increasing risk of mass deaths from starvation in many countries in Africa and in Yemen due to worsening drought and conflict, the United Nations refugee agency has called for international support to prevent the repeat of the 2011 tragedy in the Horn of Africa that claimed more than 260,000 lives.

“An avoidable humanitarian crisis in the region, possibly worse than that of 2011, is fast becoming an inevitability,” Adrian Edwards, a spokesperson for the Office of the UN High Commissioner for Refugees (UNHCR) told journalists at the regular bi-weekly media briefing in Geneva.

“A repeat must be avoided at all costs.”

According to estimates, some 20 million people are living in areas hit hard by drought. About 4.2 million among them are refugees and the number of the displaced is rising as a result of consecutive harvest failures, famine and insecurity.

In southeast Ethiopia, for example, acute malnutrition rates among newly arriving Somali refugee children aged between 6 months and five years is reported in the range of 50-79 per cent. Similarly, in South Sudan, children account for the majority of the refugees (about 62 per cent).

An avoidable humanitarian crisis in the region, possibly worse than that of 2011, is fast becoming an inevitability

Nearly all refugees, including these children, are dependent on food assistance, such as those provided by the World Food Programme – the UN's emergency food relief agency – but with lack of funds to buy food rations are being cut. Worst hit are those in Uganda where rations have been cut by up to 75 per cent. Ethiopia, Tanzania, and Rwanda (by between 20 and 50 per cent) and Djibouti (by 12 per cent) are also witnessing this decrease.

“Many refugees are without full access to livelihoods and agriculture or food production and their ability to take matters into their own hands and help themselves is limited,” noted Mr. Edwards.

Almost five million children could be out of school

The severe food insecurity is also causing many students, such as those in Kenya, to drop out of school. Some 175,000 students in drought areas in the country have stopped attending school and almost 600 schools have closed in Ethiopia.

In all, some five million children could see their educations being disrupted over coming weeks and months.

VIDEO: Speaking to reporters in Geneva, UNHCR Spokesperson Adrian Edwards warns that the risk of mass starvation in north-east Nigeria, Somalia, South Sudan and Yemen is growing fast due to drought and conflict.

The daunting humanitarian scenario has been further complicated by a range of challenges including new displacement, economic hardships, crop failure and conflict.

In Somalia, of the half a million people displaced since November, 278,000 were displaced in the first quarter of this year and the country continues to see a complex situation of both outflows and returns, mainly from Yemen.

Furthermore, in famine hit parts of South Sudan, increase in fighting, insecurity, lack of access to aid and a collapsing economy have left 100,000 people facing starvation and a further one million people are now on the brink of famine.

The humanitarian situation in Yemen, too continues to decline. Already the world's largest humanitarian crisis, food needs are being cited as the lead factor in displacement at three quarters of all locations across the war-torn country where there are internally displaced people. 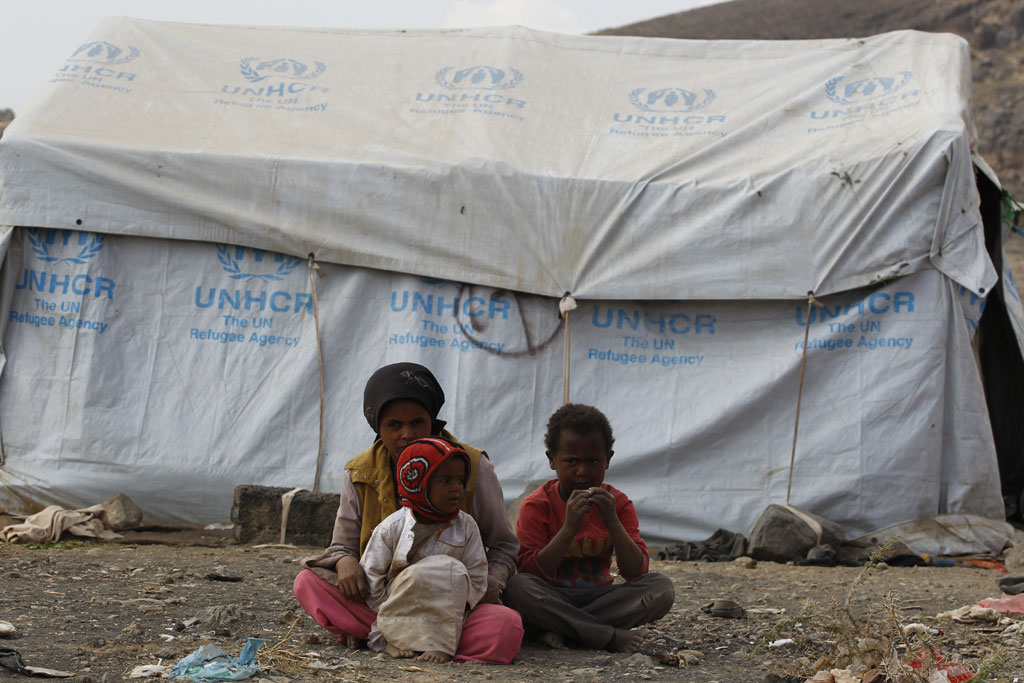 Displaced children sit outside a tent at an informal settlement in Dharwan, Yemen. The oldest among them is 12. Photo: UNHCR/Mohammed Hamoud

Responding to the growing crisis, the UN refugee agency and its partners have been scaling up their efforts.

However, UNHCR operations in these countries are facing considerable constraints due to limited funding.

“It is now urgent that the shortfalls be addressed,” underscored the UNHCR spokesperson.