Univocally condemning unlawful destruction and pillaging of cultural heritage such as religious sites and artefacts, the United Nations Security Council today adopted an historic resolution that is expected to strengthen protections for such heritage during armed conflicts where they are most vulnerable.

“The deliberate destruction of heritage […] has become a tactic of war to tear societies over the long term, in a strategy of cultural cleansing,” said Irina Bokova, the Director-General of the UN Educational, Scientific and Cultural Organization (UNESCO) following the resolution’s adoption.

“This is why defending cultural heritage is more than a cultural issue, it is a security imperative, inseparable from that of defending human lives,” she added.

Today’s briefing by Ms. Bokova to the Security Council was the first time a head of UNESCO has been invited in that capacity.

Defending cultural heritage is more than a cultural issue, it is a security imperative, inseparable from that of defending human lives – Irina Bokova,  head of UNESCO

In her briefing, she explained that since the adoption of Resolution 2199 (in 2015), which prohibits trade in cultural property from Iraq and Syria, efforts were well-underway to disrupt terrorist financing through the illicit trafficking of antiquities.

“Together, UNESCO, INTERPOL, the UN Office on Drugs and Crime (UNODC), customs services, the private sector and museums are all bolstering cooperation, coordinating new action,” she noted.

Through the newly-adopted resolution, the Security Council also underlined that such destruction can hamper post-conflict reconciliation, undermine economic and cultural development and, that, in certain conditions, could constitute a war crime.

“This is the message of this historic resolution,” she stated.

Also today, the top UN political official said that in addition to making every effort to implement the international legal and normative framework on protection of culture, as well as strengthen international cooperation, a response was needed from global criminal justice to prevent trafficking in cultural property by disrupting organized criminal and terrorist networks.

“We need to put a stronger focus on investigation, cross-border cooperation and exchange of information, and on bringing in private and public sector partners, including dealers and the tourism sector, to promote supply chain integrity and stop the illicit trade and sale of cultural property,” said Jeffrey Feltman, the UN Under-Secretary-General for Political Affairs.

“The resolution […] addresses the vital issue of trafficking in cultural property as a source of terrorism financing, and also sets out ways of protecting cultural heritage during armed conflict where it is most vulnerable,” he said, noting that it strengthened the international community's ability to tackle the issue and help acts that fund terrorism, and enable yet more destruction and looting of cultural sites and archaeological treasures.

Also speaking at the Security Council, Commander Fabrizio Parulli of the Carabinieri Italiani (the national gendarmerie of Italy) and the UNESCO Unite4Heritage task force shared the latest data on illicit trafficking, and said that over the course of last year, 800,000 artefacts had been seized by Italian forces in the fight against the financing of criminal activities.

♦ Receive daily updates directly in your inbox - Subscribe here to a topic.
♦ Download the UN News app for your iOS or Android devices.
culture|security council 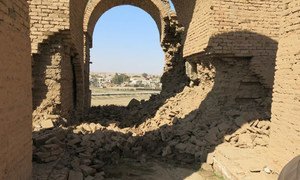 As details on the destruction of and damage to Iraq’s rich and diverse cultural heritage emerge, the United Nations cultural agency has appealed to the international community to help protect and revive the country’s archaeological, religious and cultural sites for future generations.