Bringing together a diverse array of partners to communicate the Sustainable Development Goals was a key focus on day two of the Global Festival of Ideas for Sustainable Development, a ‘playable’ United Nations conference under way in Bonn, Germany, that aims to chart new ways of thinking on addressing some of the world’s most complex development challenges.

“We have to make the world aware of this […] agenda that is definitely going to transform the planet and that is going to ensure that no one is left behind,” Cristina Gallach, the UN Under-Secretary-General for Communications and Public Information, told the Festival.

“The more we communicate about the SDGs and make people aware of the agenda, the more the governments will be accountable and will ensure that it is implemented,” she added.

The UN Department headed by Ms. Gallach, Department of Public Information, is the organization’s entity tasked with informing the wider world on the SDGs and ensuring that the 17 goals are known and understood.

To that end, 17 ‘icons’ – each with a designated bright colour, short name phrase and single image – have been created to illustrate each Global Goal.

The icons have also been translated in over 50 languages, from Czech to Bahasa Indonesia, and the number is growing.

VIDEO: Communication on Sustainable Development Goals is key to make them happen

This ‘localization’ is important to allow people around the globe take ownership of their development agenda, said the senior UN official.

“There are a lot of communications that need to be done locally in the different languages people speak locally on a daily basis” she explained.

Going local also helps people on the ground feel that that work is being done, “so local governments have to implement and local media have to monitor what goes on,” added Ms. Gallach.

Youths are the best allies

The UN has also placed a particular focus on youth with regards to the SDGs and considers a key partner in the achievement of the Goals.

“[The youth] are aware the planet is not going well and they might inherit something really bad so they want to be part of the transformation”, said Ms. Gallach, adding: “They know the goals will be achieved when they are adults, when they will be at the peak of their lives.”

The senior UN official also underscored the importance of forging partnerships in the achievement of the SDGs, as well as in communicating them. In addition to the SDG icons – designed in partnership with Jakob Trollbäck, working with Project Everyone – other examples include the branding of the Mexico city metro and a rap song about the Goals in collaboration with Flocabulary, which uses educational hip-hop music to engage with students.

“The more we communicate the more we will harvest for partnerships [and] this agenda cannot be implements without very strong partnerships” stressed Ms. Gallach.

The Global Festival of Ideas, the first in a series of annual forums, is hosted by the UN SDG Action Campaign in partnership with the Overseas Development Institute (ODI) with the support of the German Government. 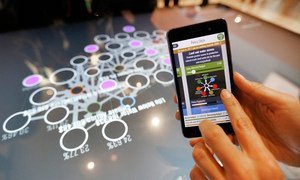 Innovation imperative to make Global Goals a reality – UN official, on day one of ideas fest

The first ‘playable’ United Nations conference on sustainable development kicked-off today in Germany’s city of Bonn, aiming to chart a new way of thinking on addressing some of the world’s most complex development challenges.