UNICEF/Rich
A community health worker with UNICEF partner Swiss-Kaalmo, based in Salamey Idale IDP camp in Somalia, goes door to door to spread health messages to mothers and children living in the camp.
22 February 2017
Humanitarian Aid

“Famine is already a reality in parts of South Sudan. Unless we act now, it is only a matter of time until it affects other areas and other countries. We are already facing a tragedy; we must avoid it becoming a catastrophe,” said the Secretary-General, stressing: “This is preventable if the international community takes decisive action.”

Briefing the press at UN Headquarters in New York alongside the UN Emergency Relief Coordinator, Stephen O'Brien, the UN Development Programme (UNDP) Administrator, Helen Clark, and by video conference, the Executive Director of the World Food Programme (WFP), Ertharin Cousin, Mr. Guterres said the UN needs at least $4.4 billion by the end of March to avert a catastrophe.

“Despite some generous pledges, just $90 million has actually been received so far – around two cents for every dollar needed. We are at the beginning of the year, but these numbers are very worrying,” he said: “The lives of millions of people depend on our collective ability to act. In our world of plenty, there is no excuse for inaction or indifference.”

These four crises are very different, but are all preventable. “They all stem from conflict, which we must do much more to prevent and resolve,” he said, urging all members of the international community to step up and do whatever is in their power, whether that is mobilizing support, exerting political pressure on parties to conflict, or funding humanitarian operations.

“Saving lives is the first priority, but we are also looking to build longer-term resilience to shocks,” Mr. Guterres said, noting that UNDP Administrator and the Emergency Relief Coordinator will set up a steering committee to link the UN Development Group and the Inter-Agency Standing Committee for humanitarian assistance to ensure a coordinated long-term approach.

Speaking next, Mr. O’Brien, who is also the UN Under-Secretary-General for the Coordination of Humanitarian Affairs, reemphasized the ongoing effort to ensure that development and humanitarian partners will work together to tackle these crises. “We want to help people survive,” he said, “but we also want to help them build more durable solutions so they will not be left in vulnerable situations.”

He went on to stress that almost 1.4 million children are at imminent risk of death from severe acute malnutrition this year, as famine looms in the four countries, an issue spotlighted yesterday by UNICEF. He said that catastrophe can be averted if action is taken now. The funding noted by the Secretary-General must be made available by the end of March to make a difference. “We are ready to scale up […] with brave and committed aid workers already in place.”

Miss Clark noted that the way forward on the four crises would very much reflect the “new way of working” among relief and development agencies agreed by the 2016 UN World Humanitarian Summit, which stressed that “the priority is saving lives and part of saving lives is building resilience for the future.”

For her part, Ms. Cousin said that in each of these four countries, “the plans are in place and the people are prepared to perform the work that is necessary. What we need is the resources and the access.”

“Acting now, before we reach the height of the lean season in these countries will ensure our ability to provide the support that is necessary to avoid what we all see on the horizon, which is a famine in each one of these countries if we fail to act,” she stated. 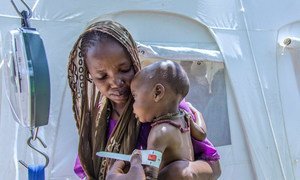