“We are facing unprecedented needs, in an unprecedented number of locations, and these needs will increase during the upcoming lean season,” said Eugene Owusu, the Humanitarian Coordinator for South Sudan in a news release issued by the UN Office for Coordination of Humanitarian Affairs (OCHA).

Humanitarian organizations estimate that some 7.5 million people across South Sudan are now in need of humanitarian assistance and protection, including some 3.4 million people who had been forced to flee their homes since conflict began in December 2013.

While disturbing accounts of violence and atrocities, including sexual violence, continue to be reported, food insecurity and malnutrition have skyrocketed. Furthermore, the risk of famine looms over thousands of people in conflict-affected communities and food deficit areas.

“With needs rising rapidly, we have rigorously prioritized the 2017 Humanitarian Response Plan to target those who most urgently require assistance and protection,” added Mr. Owusu.

Under the Plan, 137 aid organizations, including 62 non-governmental organizations (an increase of 55 per cent over the number in 2016) aim to respond to the most urgent life-threatening needs of the target population. The objectives include:

According to OCHA, delivering supplies in the country depends, in a large part, on good weather conditions.

Humanitarian organizations strive to maximize the window of opportunity provided by the dry season to deliver supplies by road. Once rain set in – usually in May – most roads become impassable and supplies must be delivered by air, multiplying the cost of the humanitarian operation, which is one of the largest and most complex in the world.

“It is imperative that this appeal is funded early, and funded fully, so that the aid workers deployed across South Sudan can respond robustly and rapidly,” said Mr. Owusu.

“I appeal to the international community, which has given so generously to this young country, to support us now. If we fail to act swiftly, lives may be lost.” 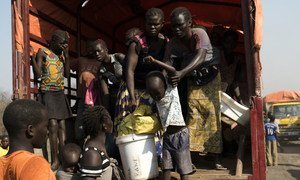 With already more than 3.5 million displaced within and outside the borders of South Sudan and thousands more driven to neighbouring countries every day, the United Nations refugee agency has appealed for an urgent peaceful resolution to what has now become Africa's worst refugee crisis.