The United Nations and the Security Council have welcomed the international talks on Syria held in the Kazakh capital of Astana, and, in separate accounts to the press, said they look forward to the resumption of the intra-Syrian negotiations.

Speaking to journalists earlier today in what was his first press conference in New York since taking office in January, Secretary-General António Guterres said the UN presence in Astana was essential to the resumption of talks in Geneva expected to begin later this month.

“Our presence in Astana was an absolute must in order to guarantee that after Astana, we could have Geneva. And in Geneva, we could discuss the key political aspects that are essential to be on the table,” Mr. Guterres said.

The two-day talks in Astana were the first time that the Syrian opposition participated in the discussions alongside representatives of the Syrian Government.

The closed-door meeting – convened by Iran, Russia and Turkey, with a representative from the United States attending as an observer – resulted in an agreement on how to monitor the ceasefire effort started in December 2016.

In a statement released late last night, the Council called the international meeting in Astana “a step towards a strengthened ceasefire.”

The Council’s 15 members said said they hoped it would lead to fewer violations, and noted the need for “secure safe and unimpeded” humanitarian access in line with the relevant Security Council resolutions.

They also expressed hope that the meeting would lead to progress in reaching a political settlement and to efforts to prevent and suppress terrorist activities by the Islamic State in Iraq and the Levant, also known as ISIL or Da’esh, the Al-Nusra Front and others.

The members “look forward” to the resumption of intra-Syrian talks, they said, and encouraged the Secretary-General’s Special Envoy, Staffan de Mistura, to re-convene the negotiations “as soon as possible.”

Speaking to journalists yesterday following his briefing to the Council, Mr. de Mistura said he had asked the Council to postpone the UN facilitated talks from 8 February until 20 February, in order to give the country’s opposition more time to unite and participate as one group.

“We want to give a chance to this Astana initiative to actually implement itself,” the Special Envoy said.

The talks in Geneva are guided by the UN Security Council resolution 2254 (2015), which endorsed a roadmap for a peace process in Syria, including issues of governance, constitution and elections. 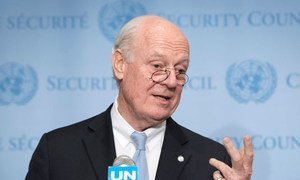 Syria: UN-supported talks delayed until 20 February to give opposition time to unite

The United Nations envoy for Syria today said that he asked the Security Council to postpone the UN facilitated talks that had been scheduled for 8 February in Geneva until 20 February, in order to give the war-torn country’s opposition time to unite and participate as one group.