WHO/Yemen
The conflict in Yemen has caused damage to health infrastructure and led to a major reduction in health care delivery.
26 January 2017

Amid attacks and counter-attacks in Yemen, those seeking a military solution will only prolong the suffering caused by the war, allow the terrorist threat to grow and deepen the challenges that will face the eventual recovery, the United Nations envoy for the war-riven country said today.

The past several months have seen a “dangerous escalation” of military activities with tragic consequences for the Yemeni people, Ismail Ould Cheikh Ahmed, the UN Special Envoy for Yemen, told the Security Council during a briefing alongside UN Emergency Relief Coordinator Stephen O’Brien.

Indeed, he explained, armed hostilities continued in many areas, including Sana’a governorate, Taiz city and in border areas between Yemen and Saudi Arabia.

“Civilians in Taiz continue to suffer from indiscriminate shelling in the city’s residential areas, with such attacks increasing in recent days, Mr. Ould Cheikh Ahmed said, adding that ground fighting and airstrikes had also escalated along the western coastline following the launch of operation ‘Golden Spear’ by the Yemeni Government and allied forces.

Both sides to the conflict continue to claim significant military progress in the media, “but I remain convinced that there is no possibility of a military solution.”

Describing “daily attacks and counter-attacks,” he said the continued military activities are all the more tragic as a viable proposal for peace is on the table and within reach of both parties. “With political courage and will, the war can be stopped,” he said, pressing both sides to demonstrate the political courage needed to stop the nearly two-year-long war. 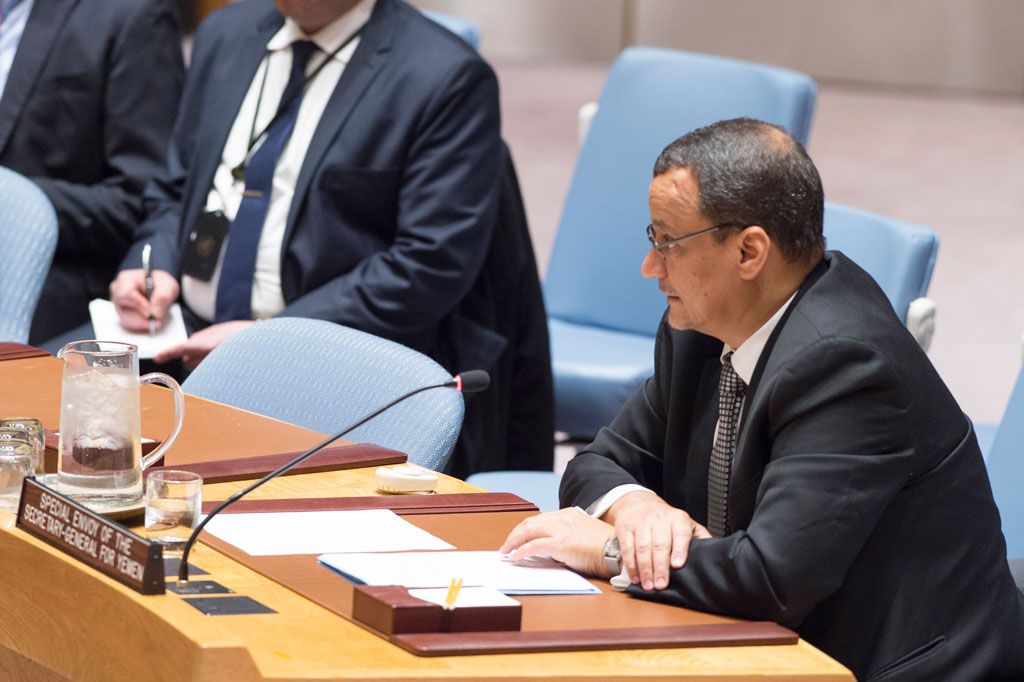 Recalling that a meeting hosted by Saudi Arabia’s Foreign Minister in Riyadh on 18 December 2016, senior officials from Oman, United Arab Emirates, the United States and the United Kingdom had concluded with calls for a rapid cessation of hostilities, he said: “We are committed to ensuring that the upcoming cessation of hostilities will be durable and provide real relief to the Yemeni people.”

He went on to state that while Ansar Allah and the General People’s Congress had accepted the road map as a basis for consultations last November, their unwillingness to discuss security arrangements seriously did not help to advance peace. Moreover, he also was disappointed at their decision to appoint a parallel government, and urged President Abd Rabbo Mansour Hadi to commit himself to consultations based on the proposals.

Stressing that “there is a clear path out of the violence,” Mr. Ould Cheikh Ahmed emphasized that his proposals have reflected the concerns and needs of both sides, and took Yemen’s political, security and social situations into consideration. “I hope Yemen’s leaders will be able to see the impact that this tragedy has had on the country, make the bold decision to commit to a political solution and put an end to the senseless violence.”

For his part, Mr. O’Brien said the conflict in Yemen is now the primary driver of the largest food security emergency in the world. “If there is no immediate action, famine is now a possible scenario for 2017.”

From the beginning of the hostilities in March 2015 to 31 December 2016, 7,469 Yemenis were killed and 40,483 injured due to the conflict, he said, noting that the true number is likely to be higher. The casualty figures include more than 1,400 children killed and over 2,140 children injured. Another 1,441 children have been recruited by warring parties, some as young as eight years old.

Beyond the direct casualties of the armed conflict, there are also the so-called ‘silent deaths’ of Yemenis that go largely unnoticed and unrecorded, he said.

According to the UN Office for the Coordination of Humanitarian Affairs (OCHA), which Mr. O’Brien heads up, more than two thirds of the population – an alarming 18.8 million – is in need of humanitarian and protection assistance, including an astounding 10.3 million Yemenis who require immediate assistance to save or sustain their lives. This is about the size of the entire population of Sweden and the numbers are rising, he added.

So far, he said, the UN verified over 325 attacks on schools, health facilities, markets, roads, bridges and even water points. Over two thirds of the damage to public infrastructure is a result of airstrikes.

In spite of the difficult conditions and tremendous challenges, the humanitarian community reached 5.6 million Yemenis in 2016, with more than 114 aid organizations are working in Yemen, he said, adding that thanks to the swift intervention by humanitarian partners, the cholera outbreak which started in October is now in decline.

Roughly $2 billion is required to support the 2017 humanitarian response, targeting 10 million of the most vulnerable people in Yemen. “I request Member States to pledge generously at the forthcoming Yemen Pledging Conference in late March,” Mr. O’Brien stressed.

He concluded his briefing by requesting Council members to once again call for an immediate ceasefire and cessation of hostilities and use their influence over the parties to the conflict to ensure that they respect international humanitarian law and to provide timely, full and unimpeded humanitarian access.

The United Nations Special Envoy for Yemen, Ismail Ould Cheikh Ahmed, today concluded a mission to the country with a call for a comprehensive political settlement of the crisis and the restoration of the cessation of hostilities, and underlined the need allow access of civilian commercial aircrafts to and from Sana’a airport.