“An exhausted civilian population is still trapped, with no escape, we are still unable to reach hundreds and hundreds of thousands,” UN Senior Adviser on Syria Jan Egeland told the press in Geneva today, emphasizing that “in terms of humanitarian access, the cessation of hostilities period has been a disappointment.”

“In January, only half of the population that we asked to reach were approved for access in full,” he added.

According to Mr. Egeland, even when a monthly humanitarian plan is approved, a bureaucratic “quagmire” including having to seek facilitation letters, permits and different levels of agreement from different actors, including armed opposition groups, prevents its effective implementation.

“All of them it seems, to avoid us helping women, children, wounded on the other side,” he said.

Mr. Egeland further said the situation in Deir ez-Zor, a desert town in eastern Syria with an estimated 93,000 civilians, was extremely concerning.

In a major offensive, Islamic State of Iraq and the Levant (ISIL/Da’esh) fighters have cut the besieged area into two and captured, among other locations, the drop zone for humanitarian supplies.

“It has not been possible since Sunday to drop new humanitarian relief to the people there who really do not have any other life-line than relief by air,” he said.

Water supply to millions in Damascus still cut off

Turning to the situation in Wadi Barada, where intense fighting had damaged the infrastructure that supplied water to more than five million people in Syria’s capital, Damascus, Mr. Egeland said:

“Repairmen are able and willing to go [and] went at one point, [until] a few days back, when one [person] was killed by a sniper [and] the whole repair mission was called off […] This situation is screaming for a cessation of hostilities […] that can enable the repairs.” 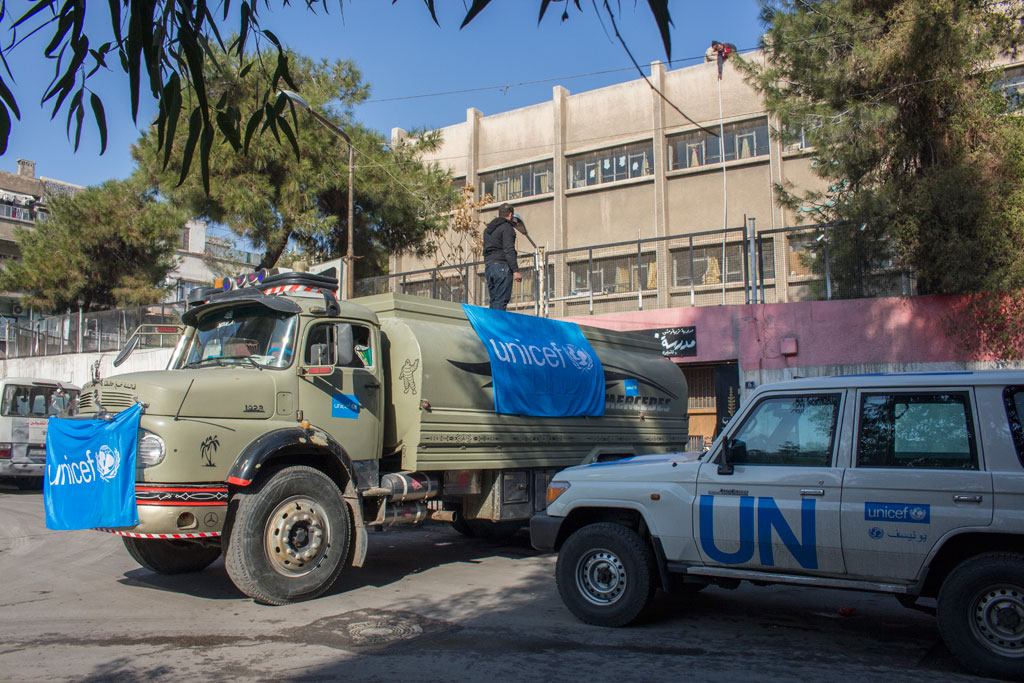 A UNICEF-supported water truck delivering water to a school in the in Al-Midan neighbourhood, Damascus, Syria. Photo: UNICEF/Muhannad Al- Asadi

The UN Senior Adviser further reported that the UN has been helping some 500,000 people in war-battered Aleppo recently.

“We will be able to reach now all populations, all over Aleppo, and that's a first for many months,” he noted.

However, Mr. Egeland added that according to reports, including by the UN Humanitarian Coordinator for Syria, Ali Al-Za’tari, “the devastation is absolutely shocking and all of the unexploded ordinances make life very difficult in the city and still, Aleppo citizens now want to go back increasingly and they need our help to rebuild it.”

Alongside this situation, more than one million people in the city remain without water because it is not possible to repair a pumping station, held in ISIL-controlled territory.

“To deny populations water, to deny repair of water supplies, is a criminal offense under international law,” he underscored.

Highlighting the significance of the upcoming meeting convened by Iran, Russia and Turkey in Kazakhstan’s capital, Astana, between the Syrian Government and opposition groups, Mr. Egeland said that the meeting offered an opportunity to help the humanitarian actors on the ground “who are able and willing to go to places with relief.”

Meanwhile, earlier today, the spokesperson for the UN Secretary-General announced that in light of the complexity and importance of the issues likely to be raised in Astana, as well as of the senior level at which the conveners of the meeting will be represented, the UN chief had appointed Staffan de Mistura, the Special Envoy for Syria, to lead the UN team at the talks.

“The Secretary-General is looking forward to the Astana meeting being a positive step, ahead of the resumption of intra-Syria negotiations in Geneva,” noted the spokesperson.

While efforts to fully implement a ceasefire in Syria continue, senior United Nations humanitarian officials today appealed for immediate, unconditional, and safe access to reach the children and families who are still cut off from relief aid across the Middle Eastern country.