UNHCR/Bassam Diab
A boy pulls a wheelchair along a debris strewn street in Al-Mashatiyeh neighbourhood of eastern Aleppo, Syria.
16 January 2017

While efforts to fully implement a ceasefire in Syria continue, senior United Nations humanitarian officials today appealed for immediate, unconditional, and safe access to reach the children and families who are still cut off from relief aid across the Middle Eastern country.

The statement was issued in the Swiss town of Davos, ahead of the World Economic Forum (WEF) from 17 to 20 January 2017, which is expected to be attended by top leaders from the business and political circles.

According to the statement, in Syria today, there are 15 besieged areas where up to 700,000 people, including an estimated 300,000 children, still remain trapped, and nearly five million people, including more than two million children, live in areas that are extremely difficult to reach with humanitarian assistance due to fighting, insecurity and restricted access.

“All over Syria, people continue to suffer because they lack the most basic elements to sustain their lives – and because of the continued risk of violence. We – indeed, the world – must not stand silent while parties to the conflict continue to use denial of food, water, medical supplies, and other forms of aid as weapons of war,” the statement stressed.

The statement also noted that children are at heightened risk of malnutrition, dehydration, diarrhoea, infectious diseases, and injury. Many need support after being exposed to traumatic events, violence and other violations. “Tragically, far too many children have known little but conflict and loss in their young lives,” it warned.

“The horrors of the siege of the eastern districts of Aleppo have disappeared from the public consciousness – but we must not let the needs, the lives and the futures of Syria's people fade from the world's conscience,” the statement added. 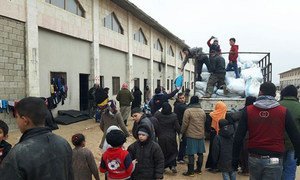 The health, hygiene and protection needs of women and girls displaced in Aleppo are staggering, the United Nations has observed, voicing concern for civilians in the Syrian city that has endured intense fighting for about four years.