UN Photo/Eskinder Debebe
President of the Security Council for January Olof Skoog (left), reads a Council presidential statement on the situation concerning the Democratic Republic of the Congo.
4 January 2017

“The Security Council is encouraged by the spirit of flexibility and compromise demonstrated by Congolese political leaders in reaching this agreement, for the stability, peace, development and consolidation of constitutional democracy in the DRC,” said a Presidential Statement read out at a formal meeting of the 15-member body today.

In the Statement, the Council also urged all political parties which didn’t sign the agreement to do so.

The agreement – facilitated by Conférence Episcopale Nationale du Congo (CENCO) mediators, and reached in DRC’s capital, Kinshasa, on 31 December 2016 – represents a significant step towards a peacefully managed transition consistent with the democratic principles enshrined in the country’s Constitution.

This new agreement followed an initial political agreement between part of the opposition and the majorité présidentielle reached in October under the auspices of the African Union facilitation.

Also by the Presidential Statement, the Council expressed hope for a swift implementation of the agreement in order to organise peaceful, credible, inclusive and timely presidential, national and provincial legislative elections no later than December 2017, as well as leading to a peaceful transfer of power.

“The Security Council stresses the importance for the Government of the DRC and its national partners to take all necessary steps to accelerate preparations for the elections without further delays, within the agreed timeframe,” added the Statement in which the Council also stressed the importance of the inclusion of women in the follow up and implementation of the agreement. 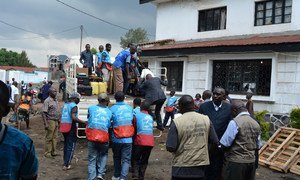 United Nations Secretary-General Ban Ki-moon today welcomed the signing today in Kinshasa, by the opposition and the Majorité présidentielle, of a political agreement on the holding of elections in Democratic Republic of the Congo (DRC) and transitional arrangements leading up to the polls.