United Nations Secretary-General Ban Ki-moon has welcomed the inauguration of the new Federal Parliament of Somalia on 27 December and warmly congratulated the people of Somalia on this historic achievement in their quest for universal suffrage by 2020.

“The successful inauguration of the Parliament marks further progress in ensuring political stability and security in Somalia,” said a statement issued overnight by Mr. Ban's spokesman.

The tenth Parliament of Somalia was inaugurated in a ceremony yesterday that saw 283 parliamentarians take an oath of allegiance.

In the statement, the Secretary-General urged the new Parliament to now maintain the momentum by moving swiftly to complete the electoral process, with the election of the Speakers of both houses and the Federal President.

“The Parliament should tackle urgent legislative priorities, including establishing a permanent Constitution of Somalia, in the larger interest of the people of Somalia,” the statement added.

Further, the Secretary-General called on the authorities to fill all remaining vacant seats in the Parliament expeditiously, while fulfilling their obligation to ensure that the seats reserved for women are filled by women. He also emphasized that any irregularity, abuse, or malpractice reported by the federal and state electoral bodies should be fully addressed to preserve the credibility of the process.

The Secretary-General commended the hard work of the Somali security forces and the AU Mission in Somalia (AMISOM) in providing a secure environment for the 2016 electoral process in Mogadishu and in the regional capitals, the statement added.

According to the UN Department of Political Affairs, the United Nations has been engaged with Somalia since 1991 to support its Government and people to advance the cause of peace and reconciliation, following two decades of lawlessness and conflict.

The Security Council established the UN Assistance Mission in Somalia (UNSOM) on 3 June 2013 to provide policy advice to the Federal Government and AMISOM in the areas of governance, security sector reform and rule of law, and development of a federal system, including preparations for elections in 2016. 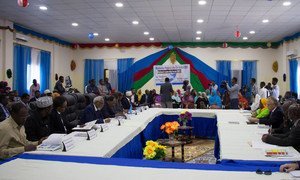 The United Nations and other members of the international community have voiced grave concern over recent decisions by Somalia’s National Leadership Forum (NLF) that contravenes the African country’s constitutional electoral processes.