Earlier this year, a report by the non-governmental organization Public Eye exposed how European trading companies are exploiting weak regulatory standards in West African countries, thus allowing fuels with sulphur levels that are up to 300 times higher than those permitted in Europe.

“West Africa is sending a strong message that it is no longer accepting dirty fuels from Europe,” said Erik Solheim, head of UNEP. “Their decision to set strict new standards for cleaner, safer fuels and advanced vehicle emissions standards shows they are placing the health of their people first.”

He hailed the move as an example for other countries, noting that air pollution kills millions annually.

“We need to ensure that all countries urgently introduce cleaner fuels and vehicles to help reduce the shocking statistics,” stated Mr. Solheim.

In addition to new fuel standards, the group of West African countries has agreed to upgrade their own public and private refineries to meet the same higher standards by 2020.

UN Environment has been working with countries in West Africa to develop policies and standards that will stop the import of fuels with dangerously high levels of sulphur, as well as to introduce cleaner fuels and vehicles. Reducing such emissions around the world is essential to ensure levels of urban air pollution and climate emissions come down.

Combining low-sulphur fuels with advanced vehicle standards can lead to as much as a 90 per cent reduction in harmful emissions.

According to Nigeria’s Environment Minister Amina J. Mohamed, “for 20 years, Nigeria has not been able to address the vehicle pollution crisis due to the poor fuels we have been importing. Today we are taking a huge leap forward: limiting sulphur in fuels from 3,000 parts per million to 50 parts per million. This will result in major air quality benefits in our cities and will allow us to set modern vehicle standards.”

Today in The Hague, Mr. Mohamed will meet with Lilianne Ploumen, Dutch Minister of Foreign Trade and Development Cooperation in order to take stock of the progress being made to improve the quality of fuels that have been exported from Dutch ports to countries in West Africa, as The Netherlands produces many of the exported dirty fuels.

“The recent report from the NGO Public Eye made abundantly clear that coordinated action is needed to stop the practice of exporting dirty fuels to West Africa. I am very pleased West African governments quickly decided to introduce standards that will help accessing European standard quality fuels. Their people deserve cleaner air, better health, and a cleaner environment. I commend UN Environment for their excellent work,” announced Minister Ploumen.

UNEP hosts the Secretariat of the Partnership for Clean Fuels and Vehicles (PCFV), a global public-private partnership that supports a shift to cleaner fuels and vehicles worldwide. When PCFV began its work in 2005, not a single low or middle income country used low sulphur fuels. Today, 23 countries have made that shift. Another 40 are on their way to doing the same.

In addition, UNEP is hosting the Climate and Clean Air Coalition, which recently adopted a global strategy for moving the world to clean, low-sulphur fuels and advanced emissions standards. Experts estimate that this measure will save an annual 100,000 premature deaths by 2030.

UN co-organizes campaign to clean up pollution in Lake Victoria 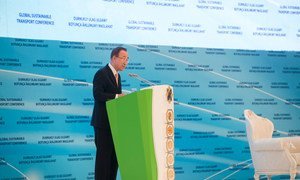 Opening the first-ever Global Sustainable Transport Conference, United Nations Secretary-General Ban Ki-moon told delegations gathered in Ashgabat, Turkmenistan, that the world has the resolve, commitment, imagination and creativity “to transform our transport systems in a sustainable manner that will improve human wellbeing, enhance social progress and protect our planet.”