OCHA/Gemma Connell
Humanitarian partners have responded rapidly and are working around the clock to assist people in Wau, South Sudan.
30 November 2016

Expressing deep concern over the impact of a series of bureaucratic impediments and access constraints on relief operations, a senior United Nations humanitarian official in South Sudan has called on all parties to allow free, safe and unhindered humanitarian access to the people in need.

“Humanitarian organizations in South Sudan are striving every day to save lives and alleviate suffering across this country,” said Eugene Owusu, Humanitarian Coordinator for South Sudan in a news release issued by the UN Office for the Coordination of Humanitarian Affairs (OCHA).

“Yet, they continue to face obstacles and challenges which hamper their efforts. This must stop.”

Humanitarian organizations are striving every day to save lives and alleviate suffering across South Sudan but they continue to face obstacles and challenges which hamper their efforts.

Also in November, relief workers were denied access to areas outside of Yei in Central Equatoria and Wau in Western Bahr El Ghazal, where tens of thousands of people are in need of assistance and protection.

The UN humanitarian arm further reported that needs in the country continue to rise due to the conflict and economic decline. It is estimated that about three million people have been displaced, of which more than 1.1 million people have fled to neighbouring countries as refugees, since fighting first broke out in December 2013.

Further in the release, Mr. Owusu also noted steps taken by the Government to address the access challenges, including the establishment of a high-level humanitarian oversight committee.

He, however, added that the recent incidents were a “major challenge” and that the commitments needed to be translated into “real, tangible and immediate improvements in the operating environment for aid workers on the front-lines of humanitarian action.” 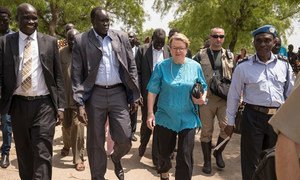 INTERVIEW: ‘Cling to every little sign of hope’ – outgoing head of UN Mission in South Sudan

On 23 July 2014, United Nations Secretary-General Ban Ki-Moon announced the appointment of Ellen Margrethe Løj of Denmark as his Special Representative and Head of the United Nations Mission in the Republic of South Sudan (UNMISS). Ms. Løj succeeded Hilde Johnson of Norway, who had completed her assignment two weeks earlier, on 7 July 2014.