FAO
One of the areas most affected by extreme hazards, in particular natural hazards, is the Dry Corridor of Central America, with recurrent droughts, excessive rains and severe flooding affecting agricultural production.
29 November 2016

About 30,000 families in 58 municipalities in Nicaragua’s ‘Dry Corridor,’ the area of the country most affected by droughts and climate change, are expected to benefit from a financial agreement between the United Nations International Fund for Agricultural Development (IFAD) and Nicaragua to boost sustainable agricultural production.

About 30,000 families in 58 municipalities in Nicaragua’s ‘Dry Corridor,’ the area of the country most affected by droughts and climate change, are expected to benefit from a financial agreement between the United Nations International Fund for Agricultural Development (IFAD) and Nicaragua to boost sustainable agricultural production.

“In recent months, we have seen how bad things can be, not only for small farmers, but for the entire population living in the area,” said Ladislao Rubio, IFAD’s Country Programme Manager for Nicaragua, noting that the rise in temperatures caused by the El Niño phenomenon made agriculture almost impossible, leaving more than 3.5 million people in Central America dependent on food aid to survive.

“The only way to avoid these food crises is to build small farmers’ resilience to climate change by investing in climate-smart agriculture,” he added.

Regional falling agriculture production has led to food insecurity and particularly a decline in household incomes and has stretched rural families and indigenous people’s resilience.

With the investment, the UN agency, through the Dry Corridor Rural Family Sustainable Development Project (NICAVIDA) project, addresses the situation of Nicaraguan smallholders living in the Dry Corridor, a strip of land in which with 52 per cent of soils are overused and 40 per cent is strongly or severely eroded.

By assisting with projects such as this storage system for irrigation water, FAO is supporting the countries of the Dry Corridor in Central America in addressing disaster risks that affect agriculture and food and nutrition. Photo: FAO/Honduras

“Life in the Dry Corridor was never easy, but climate change has made things even worse and, unless we give small farmers living there the tools they need to adapt to increasingly dry and unpredictable weather, they will not be able to cope,” said Mr. Rubio.

The NICAVIDA project aims to ensure small farmers’ access to nutritious food and an adequate diet and increase their capacity for natural resource management and adaptation to climate change by promoting the links between economic diversification, productive transformation, environmental protection and family nutrition.

IFAD, together with regional partners will, among others, focus on the needs of communities in terms of infrastructure, road improvement and investments in public services that will improve the living standards of the Corridor’s rural families and indigenous peoples, and connect them to markets.

The term Dry Corridor defines a group of ecosystems in the eco-region of dry tropical forests in Central America covering the lowlands of the Pacific coastal area, and most of central pre-mountain region of El Salvador, Guatemala, Honduras, Nicaragua, and parts of Costa Rica and Panama.

The total cost of the project is $48.5 million, of which IFAD is providing $20.5 million. The other contributors are: the Central American Bank for Economic Integration ($15 million), the Government of Nicaragua ($6 million) and the beneficiaries themselves ($7 million).

About 191,380 households benefit from IFAD’s involvement in the Central American country, and the NICAVIDA project is one of the agency’s three ongoing operations. IFAD also sponsors the Agricultural, Fishery and Forestry Productive Systems Development Programme project in North Atlantic Autonomous Region and South Atlantic Autonomous Region Indigenous Territories as well as Adapting to Markets and Climate Change Project. 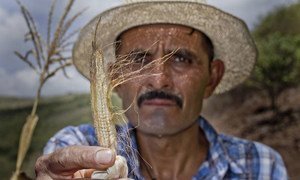 The United Nations International Fund for Agricultural Development (IFAD) today issued a new report which shows that for every dollar invested through its Adaptation for Smallholder Agriculture Programme (ASAP), farmers could earn a return of between $1.40 and $2.60 over a 20 year period by applying climate change adaptation practices.