“Millions of people with HIV are still missing out on life-saving treatment, which can also prevent HIV transmission to others,” said WHO Director-General Margaret Chan in a news release.

“HIV self-testing should open the door for many more people to know their HIV status and find out how to get treatment and access prevention services,” she added.

According to a WHO progress report, lack of an HIV diagnosis is a major obstacle to implementing the Organization’s recommendation that everyone with HIV should be offered antiretroviral therapy (ART).

HIV self-testing means people can use oral fluid or blood- finger-pricks to discover their status in a private and convenient setting. Results are ready within 20 minutes or less. Those with positive results are advised to seek confirmatory tests at health clinics. WHO recommends they receive information and links to counselling as well as rapid referral to prevention, treatment and care services.

Between 2005 and 2015, the proportion of people with HIV learning of their status increased from 12 per cent to 60 per cent globally. This increase in HIV testing uptake worldwide has led to more than 80 per cent of all people diagnosed with HIV receiving ART.

Men account for only 30 per cent of people who have tested for HIV. Testing also remains low among men who have sex with men, sex workers, transgender people, people who inject drugs, and people in prisons – who together comprise approximately 44 per cent of the 1.9 million new adult HIV infections that occur each year.

The new WHO guidelines recommend ways to help HIV positive people notify their partners about their status, and also encourage them to get tested.

Another highlight of this year’s World AIDS Day is the launch of the hands up for #HIVprevention campaign that will explore different aspects of HIV prevention and how they relate to specific groups of people, such as adolescent girls and young women, key populations and people living with HIV. 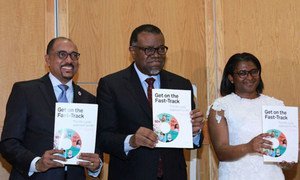 The United Nations warned today that while more people than ever are accessing antiretroviral treatment for HIV, girls aged 15 to 24, transitioning to womanhood, face many HIV-related challenges, particularly in sub-Saharan Africa, and called for a life-cycle approach to finding solutions for everyone, at all stages of life.