Noting that three quarters of UN Member States share rivers or lake basins with their neighbours, United Nations Secretary-General Ban Ki-moon today highlighted the value of water resources as a reason for cooperation, not conflict.

“The need for coordination in water management is especially compelling for the more than 260 international rivers and at least that many transboundary aquifers,” Mr. Ban told a Security Council debate, which was open to non-Council members.

According to a concept note issued by Senegal, the Council’s President for November, in the same way that disputes over oil and land have led to conflicts now and in the past, disputes over water could lead to confrontations in the future, if nothing is done. The debate is an opportunity to showcase successful experiences and mechanisms for cooperation and mediation with a view to strengthening one of the UN’s weaknesses – conflict prevention.

“Access to water can exacerbate communal tensions,” the UN chief said, citing hostile competition for scarce water resources in Darfur and Afghanistan as well as protests and violence against extractive companies by local communities in Peru.

On the other hand, shared water has historically – and sometimes rather improbably – brought adversaries together, and served as a crucial confidence-building measure in both inter-state and intrastate conflicts, Mr. Ban stressed, noting that in the second half of the 20th century, more than 200 water treaties were successfully negotiated.

A dam in Um Baru, North Darfur, which, during the rainy season, increases water storage, supports frequent irrigation of agricultural lands and reduces the risks of floods. Photo: UNAMID/Hamid Abdulsalam

In addition, he said, international river agreements have enhanced security and stability in river basins, such as the 1960 Indus Waters agreement between India and Pakistan, which has famously survived at least two wars and numerous clashes and diplomatic crises.

In the Nile Basin, last year’s signing of a Declaration of Principles by the Governments of Egypt, Ethiopia and Sudan, followed more recently by various formal and informal dialogues, has been a vital confidence-building measure.

And in the Senegal River Basin, riparian States including Mali, Mauritania and Senegal have had a long history of benefit-sharing, providing a cornerstone for regional stability and peace.

With at least one in four human beings likely to live in a country affected by chronic or recurring shortages of fresh water by 2050, the UN has actively promoted the potential of water for cooperation, the Secretary-General said.

The work of the UN Regional Centre for Preventive Diplomacy for Central Asia (UNRCCA) on “hydro-diplomacy” is one notable example. The UN Economic Commission for Europe (ECE) Water Convention is now open for accession to all UN Member States, offering the opportunity to create a global framework for dealing with transboundary water issues. The Department of Political Affairs and the UN Environment Programme (UNEP) have published a useful guide containing best practices in this area.

The Laghman River, one of Afghanistan’s many waterways, is essential to agriculture and other development in this largely rural eastern province. Photo: UNAMA/Fardin Waezi

Mr. Ban also stressed the central role of women in local water management, the negatively compounding impact of climate change on these challenges as well as the holding of water resources as military strategies.

“Despite these serious challenges, we must also recognize the potential for cooperation around shared water resources,” he said. “And let us commit to invest in water security as a means to ensure long-term international peace and security.” 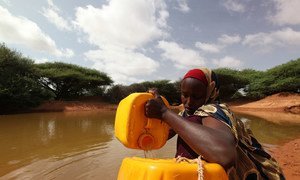 With nearly half of the world’s workers employed in water-related sectors, sustainable access to safe water can change lives and livelihoods, the United Nations today said, underscoring the link between water and jobs, this year’s theme for World Water Day.