Briefing the United Nations Security Council for the last time, the Special Representative of the Secretary-General for South Sudan called on the 15-member body to continue to accord priority to the country and to consider the future of its people in taking any decisions.

“The people of South Sudan have suffered far too much and for far too long. The victims of this conflict still carry hope and have high expectations from the international community,” Ellen Margrethe Løj told the Council today.

“I urge all involved and especially the South Sudanese leaders never to lose sight of the ultimate goal – a peaceful and prosperous future for the people of South Sudan,” she added.

Ms. Løj underscored that the difference between the success and failure of the South Sudanese Peace Agreement lay in its comprehensive and inclusive implementation by its parties and called for sustained regional and international support to the country.

Further in her briefing, she highlighted that the security situation in the country, particularly in the Greater Equatorias, in parts of Unity, and Western Bahr el Ghazal states, remained volatile, with frequent attacks that resulted in civilian casualties and displacement, as well as disrupted supply of essential goods, including food.

The envoy also said the increasingly fragmented conflict – often with ethnic undertones – continued to push the country towards further division and risked a full-scale civil conflict.

“Much more needs to be done by the Transitional Government [of National Unity] to put a stop to these security incidents that contribute to an environment of instability and violence, lead to displacement and exacerbate the already dire humanitarian situation,” she said, underscoring the need to take actions that arrest the increasing ethnic tensions.

Ms. Løj, also the head of the UN Mission in South Sudan (UNMISS), informed the Council that despite an agreement between the Government and the Mission on freedom of movement, military commanders on the ground were either not informed of or disregarded the agreement, causing significant challenges to the Mission’s movement and patrols.

In addition, she drew attention to the humanitarian situation that remained “dire” with some 4.8 million people estimated to be severely food insecure and farmers in parts of the country likely to miss the upcoming planting season due to lack of availability of seeds, caused by fragile security.

“Our humanitarian colleagues are doing their outmost best to reach people in need but they continue to face obstacles in terms of movement, bureaucratic procedures and criminality,” she said.

This briefing was Ms. Løj’s last briefing to the Security Council in her current post. She steps down from these positions at the end of November.

Recalling his recent visit to South Sudan, Adama Dieng, the UN Special Adviser on the Prevention of Genocide, painted a grave picture of the situation, saying he had undertaken the trip because of his growing concern about ethnically-fuelled violence, which is taking place against a breakdown in the political process and a stalled peace agreement.

In the course of the week he was in the country, he had met a variety of stakeholders, including religious and community leaders, including in Yei, which been spared the widespread violence of other areas but has now been identified among the country’s conflict hotspots, with escalating violence against multiple tribe and ethnic groups, reportedly carried out by the Sudan People's Liberation Army (SPLA), the SPLA in Opposition, as well as unidentified armed groups and bandits.

“I was dismayed that what I saw confirmed my concern that there is strong risk of violence escalating along ethnic lines with a potential to spiral into genocide; I do not say that lightly,” Mr. Dieg told the Council, noting that the ongoing conflict is also taking an ever-increasing economic toll, both domestically and internationally, causing a drain on funds that could be devoted to much-needed humanitarian assistance.

“South Sudan will see neither growth nor development as long as security accounts for half of Government spending,” he warned.

He went on to say that the early July outbreak of violence is fresh in the minds of people he had met and they noted the potential for more such violence in the coming dry season. Violations of the ceasefire by all sides, widespread impunity and lack of accountability, were clearly evident and the feeling seemed to be that what had once been an undisciplined army formed out of two opposing groups is now an “amorphous and undisciplined force that has splintered into multiple armed groups, criminal gangs and bandits, over which the Government is failing to exercise control.”

Mr. Dieng said he had sensed a “tremendous mistrust” between civilians and the military and rather than as a source of protection, many ordinary people saw the armed forces as an entity to be feared or joined as one of the country's few employers. One elder had given him a chilling assessment of the ethnic polarization: “in the eyes [of some people] he saw fear, while in the eyes of others, he saw enthusiasm.”The Special Advisor went on to express deep concern about inflammatory rhetoric, stereotyping and name calling have been accompanied by targeted killings and rape of members of particular ethnic groups, and by violent attacks against individuals or communities on the basis of their perceived political affiliation. The media, including social media, are being used to spread hatred and encourage ethnic polarization.

“I am particularly concerned by the involvement of the youth of this country in this dangerous spread of hatred and hostility, as they are particularly susceptible to divisions within society,” continued Mr. Dieng, underscoring: “So, all the warning signs are there, that what began as a political conflict has transformed into what could become an outright ethnic war.”

Indeed, he said the stalled peace agreement, stagnating economy and spread of arms are the “ingredients for a dangerous escalation of violence – because both motivation and a means” are present in South Sudan.

Here, he emphasized that genocide is a process. “It does not happen overnight. And because it is a process and one that takes time to prepare, it can be prevented. Action can and must be taken now to address some of the factors that could provide fertile ground for genocide.”

Moreover, African leaders must coalesce around a coherent strategy to prevent an escalation of violence. “I saw all the signs that ethnic hatred and targeting of civilians could evolve into genocide if something is not done now to stop it. I urge the Security Council and Member States of the region to take action,” Mr. Dieng concluded. 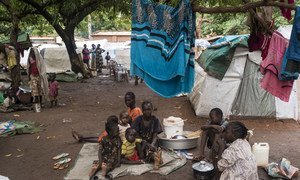 Visiting conflict-plagued South Sudan, the United Nations envoy on genocide prevention today warned that the African country is at risk of plunging into “an outright ethnic war” and of genocide being committed.