UNICEF/UN027524/Ohanesian
Over 9,000 displaced people seeking a safe place to stay have moved into the church compound in Wau, South Sudan.
11 November 2016

Visiting conflict-plagued South Sudan, the United Nations envoy on genocide prevention today warned that the African country is at risk of plunging into “an outright ethnic war” and of genocide being committed.

“I am dismayed to report that what I have seen and heard here has confirmed my concerns that there is a strong risk of violence escalating along ethnic lines, with the potential for genocide,” Adama Dieng, the UN Special Adviser on the Prevention of Genocide, told reporters in Juba, the nation’s capital.

“Throughout the week, conversations with all actors have confirmed that what began as a political conflict has transformed into what could become an outright ethnic war,” he added.

South Sudan gained independence from Sudan in 2011. But war broke out in 2013 between forces loyal to President Salva Kiir and those of former Vice-President Riek Machar. The political rivals signed a peace agreement in August 2015 to formally end their differences. But in early July this year, close to the fifth anniversary of the country’s independence, the youngest nation was plunged into fresh violence due to clashes between the two rival forces. Mr. Dieng explained that the purpose of his visit to South Sudan was to better understand the landscape of ethnically-fuelled violence, including hate speech and incitement to violence, and to provide assistance where requested.

“The role of my Office is to strengthen the role of the United Nations in protecting populations from atrocity crimes and their incitement – by which I mean genocide, war crimes and crimes against humanity, as well as ethnic cleansing – by collecting and assessing relevant information, advocating for preventive action, and raising awareness about the causes and dynamics of these atrocities,” he said.

“I work within the United Nations and with Member States, regional and sub-regional organizations, and civil society to develop more effective and possible courses of action,” he added, noting that he has spoken to UN colleagues, senior government officials, civil society groups, religious leaders, and community members.

He said that during the course of this week, he has seen that there is extreme polarization between some tribal groups, which has increased in certain places since the outbreak of violence in July.

Inflammatory rhetoric, stereotyping and name calling have been accompanied by targeted killings and rape of members of particular ethnic groups, and by violent attacks against individuals or communities on the basis of their perceived political affiliation, and the media, including social media, are being used to spread hatred and encourage ethnic polarization, and letters threatening specific groups have surfaced in the last month, he said.

“I am particularly concerned by the involvement of the youth of this country in this dangerous spread of hatred and hostility, as they are particularly susceptible to divisions within society,” he said.

The perpetrators and victims are not homogeneous, which makes an assessment of the risk of atrocity crimes in South Sudan very complex, he noted. “But the patterns are there,” he warned.

“With the stalling of the implementation of the Peace Agreement, the current humanitarian crisis, a stagnating economy and the proliferation of arms, all of the ingredients exist for a dangerous escalation of violence,” he said.

He said he was last in South Sudan in 2014, and serious commitments made at that time to end violence have been unfulfilled.

“I must emphasize that genocide is a process. It does not happen overnight. And because it is a process and one that takes time to prepare, it can be prevented,” he said, urging action to address some of the factors that could provide fertile ground for genocide.

Genocide is a process. It does not happen overnight. And because it is a process and one that takes time to prepare, it can be prevented

What surfaced over and over in his discussions this week was the presence of long-standing anger, combined with misconceptions and preconceived notions. “These need to be addressed if there is to be a chance of peace,” he said, expressing hope that his assessment will provide impetus for preventive action. Turning to the situation in Yei River state, which he briefly visit, he said that until recently, Yei has been spared the widespread violence of other areas but he heard reports of violence that included targeted killings, assault, maiming, mutilation, rape, and the barbarous use of machetes to hack families to death.

“The gravity of the situation in Yei merits immediate intervention – a full scale fact-finding investigation and enhanced humanitarian support,” he said.

“The state has the primary responsibility to protect its populations. That means all South Sudanese, irrespective of their ethnic, national or political affiliation,” he said. Other States, regional organisations and the international community can assist its protection efforts, however.

For his part, he said he will inform the international community of his assessment, call for action and speak with members of the African Union and the Security Council, as well as the Intergovernmental Authority on Development (IGAD). 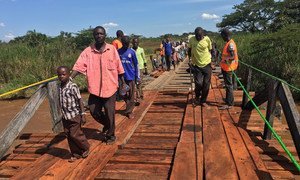 The ongoing conflict in South Sudan has led to immense suffering and displacement, with an average of 3,500 people fleeing the country each day to neighbouring countries, prompting the Office of the United Nations High Commissioner for Refugees (UNHCR), national authorities, and other humanitarian actors to race to create safe and humane conditions for arrivals – 90 per cent of whom are women and children.